The hallmarks of India’s recent muscular assertiveness have been high doses of spin-mastery in both domestic and international matters. Whether it is suppressing the truth of resistance against occupation in Kashmir, the persecution of Muslims by Hindutva brigades, or brutal sparring with China, Chanakya neeti is the order of the day. This art of deception, deflection, and disinformation was perfected by Chanakya 1000 years before Machiavelli.

Undoubtedly, Chanakya neeti is more toxic than the Machiavellian mix of half-truth and full-lies, misinformation, and manipulation. Some have described Machiavelli’s The Prince as the ‘Mafia Bible’ written by Satan. In comparison to Chanakya, Machiavelli, for all his devilish prescriptions, comes across as a kindly saint.

Chanakya (also known as Kautilya, or ‘the crooked’) is the author of two masterpieces of amoral politics– Chanakya neeti and Arathshastra. On statecraft and foreign relations, these compendia lay out the contours of how the governments should conduct the affairs of governance and international relations. Indian leaders of the past and present, including Nehru and Indira Gandhi, have taken pride in the percepts of Chanakya, the seer of deception and falsehood.

The essence of the Arathshastra is that in both the domestic and international affairs, pragmatism and utilitarian values determine various actions and policies regardless of ethical or moral norms. The ends rationalize the means, however cruel and immoral. For example, to encourage almsgiving by the devotees, according to Chanakya, a ruler is justified to fake divine miracles.

One of the most telling and consequential prescriptions of the Arathshastra is that India must necessarily treat its immediate neighbors as hostile and establish alliances with the states that encircle those ‘hostile’ neighbours. India has lived up to this advice by treating Pakistan and China as its adversaries and establish relations with Japan, Australia, Bangladesh, and Afghanistan to the likely detrimental encirclement of China and Pakistan: The assertion that ‘my enemy’s enemy is my friend’actualised.

The general political and policy prescriptions of these two books are mindboggling. They should form essential reading for those at the helm in the foreign policy and security institutions in Pakistan and elsewhere. 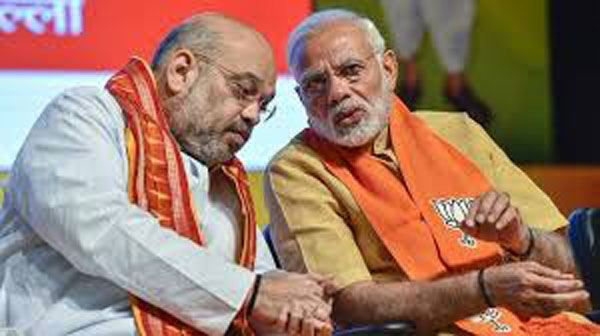 Many in India do not stand with falsehood. The usually reticent former Indian PM, Manmohan Singh, has offered a bit of advice for Narendra Modi that “…disinformation is no substitute for diplomacy or decisive leadership. The truth cannot be suppressed by having pliant allies spout comforting but false statements.” This saintly and timely advice came in the wake of Modi’s denial that the Chinese had occupied the Indian territory near the Galwan Valley in Ladakh.

According to an influential Chinese political thinktank, the scrapping of Art. 370 by India in Occupied Kashmir was the last straw in the camels’ back that triggered the Chinese onslaught across LAC. The Chinese message was clear: “Regardless of how confident India is and no matter how good it feels about itself…[India’s] attempts to forcibly seize territory are doomed to fail.”

Having received the hammering at the border, at the cost of 20 precious Indian lives, the Narendra Modi has again taken refuge in the Chanakyan falsehood. Lyrically deceitful in front of the All-Party Meeting in New Delhi, he stated: “Neither is anyone inside our territory nor is any of our posts captured.”

Which one is it?

It is our, and India’s, misfortune that Modi has perfected the art of serenading his supporter base through gyratory rhetoric, telling them what they want to hear: ‘India is an exceptional country and an aspiring superpower capable of making Pakistan “bite the dust” in less than ten days. Pat comes the adulating crowd’s affirmation: Bharat Mata ki Jai! That noise then fuels more of the same toxicity from the fascist leader. The only thing more damning than a fascists’ toxicity is those who believe in that toxicity. It has been rightly said “When one with honeyed words but evil mind persuades the mob, great woes befall the state.”

Meanwhile, India has met its match on the LAC. How many days will it take for the regional hegemon to bring the Chinese dragon to its knees? Such pervasive is India’s paranoia about being poisoned by China or Pakistan that for 180 days in 2013, the Indian army mistook two terrestrial bodies for Chinese spy drones only to be admonished by the Indian Institute of Astrophysics that the suspected ‘Chines drones’ were the planets– Jupiter and Venus.

The Sangh Parivar thrives on antagonism and falsehood. It is fundamental to their mentality and their political and social DNA. Like all populist nationalists, they feign democratic credentials to gain and stay in power and yet have shown total disdain for democratic norms once they got there. They loath social and political pluralism, detest free media, abhor multiparty political system, and are suspicious of an independent judiciary. Therefore, the Fourth State and the judicial system become two of their prime targets to subdue and control.

The fascists in New Delhi have reduced their policy motives and actions to a few political phrases such as “patriotism” and “national security.” Some of the most toxic components of their shallow patriotism are the emotional engagement of people, cultist adoration of the leader, and invention of an imaginary enemy that the gullible masses must go after. No people better fit the Sangh Parivar’s characterization of an eternal enemy than the Muslims– ‘the beef-eating representatives of the Mughals’ who live in India and Pakistan.

Such is the severity of their toxicity that India’s public has been conditioned to accepting repression and coercion as acceptable behaviors by their government. It is a shame that the unsuspecting public does not realize that the Indian state perpetrates far more heinous crimes than committed by Rangaand Billa by killing unarmed and captive civilians in Kashmir.

The convicted criminals, Ranga and Billa, our readers may recall, were the two beasts who disappeared and later killed, two innocent children, Geeta and Sanjay, for ransom. Isn’t the disappearing, killing, and maiming of innocent children of Kashmir by the Indian soldiers barbarous? What glory does your cheap plastic ‘patriotism’ bring you?

In the 2018 elections, the BJP received 37.4% of the popular vote as compared to National Democratic Alliances’ 45%. Even so, they have arrogated themselves to be the only authentic representatives of the people’s popular will. They have delegitimized political opponents as unpatriotic apologists bent on harming the perceived national interest.

The deception and disinformation tactics have corrupted the political domain and infiltrated into the judicial sphere. The judicial deceit came into full display in the case of the Bari Masjid verdict, where the legal was sacrificed on the altar of political. In a brazen display of judicial abdication, the Supreme Court invented a politically motivated justification of ‘public peace and tranquility’ and handed over the land to the Hindu extremists, trashing the legal consideration as the prime determinant of the judicial decision.

A former editor of the weekly Outlook recently remarked that since the BJP’s rise to power, the veneer of secular India has faded, and the polity degenerated into the longstanding Hindutva agenda. India has become what it always wanted to be: A Hindu state that must “pummel minorities…push them into a corner… show them their places…conquer Kashmir… ruin the media [and]…make corporations servants of the state”.

For example, to conquer Kashmir, they have built a dishonestnational and international narrative, and a brutal security structure on the edifice of falsehood that there is no rebellion in Kashmir. It is Pakistan encouraging a ‘few hundred’ youths to create a law and order situation. As a response, the national security state must deploy 900,000 lethally armed soldiers, order yearlong shutting down of the Internet, blind and kill children with palette guns, incarcerate 13000 boys and scores of male and female journalists and hundreds of political leaders.

Modi’s peddling of falsehood through deception, deflection, and disinformation comes with an expiration date. It works until it doesn’t work anymore.

Curtailing civil liberties, imposing curfews and incarcerations, engineering demographic changes, or manipulating socioeconomic and electoral metrics designed to alter the Muslim majority character of Kashmir or disenfranchising the Muslim minorities in India, will inevitably lead to rebellion against tyranny and oppression. It is not a matter of ‘if’ but ‘when.’

The writer is a freelance writer based in North America