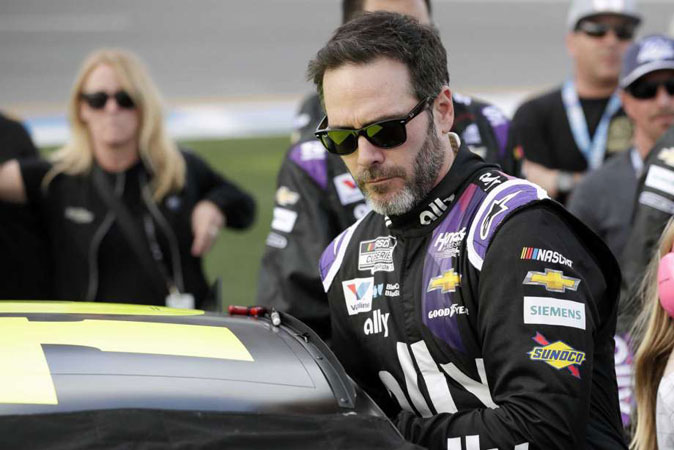 INDIANAPOLIS: Jimmie Johnson’s stance has softened when it comes to racing the Indianapolis 500.

Johnson will test an Indy car next week for Chip Ganassi Racing on the road course at Indianapolis Motor Speedway, the first step the seven-time NASCAR champion must take to determine if actual races are in his future. If he’s any good, he said, he would be open to racing all 12 street and road course events on the IndyCar schedule.

The 44-year-old Johnson has long said safety concerns would keep him from racing on IndyCar oval tracks, but Friday he offered a surprisingly softer stance about the Indy 500. IndyCar this year unveiled its aeroscreen windshield designed to protect the drivers from debris as they sit in the open-air cockpits. Saturday will mark just the second race with the device, but it appeared problem-free last month on the oval at high-speed Texas Motor Speedway.

“Their safety on ovals has dramatically increased this year with the windscreen. So, I´ll keep a close eye on things there and see how the safety level looks,” Johnson said. “I´ve always wanted to race the Indy 500. I´d have to do a lot of selling to my wife to get that pass, but my true desire right now is to just run the road courses.”

Johnson has his eye on the street course race in Long Beach, California, a race that was canceled this year because of the coronavirus pandemic but is one of the most storied events on the IndyCar calendar at a track just a couple hours from his native El Cajon.

“When I was a kid growing up, the closest IndyCar racing for me was at Long Beach so one of my hopes is that I am able to race at Long Beach,” Johnson said. “I hung on the fence a lot as a kid watching and dreaming. …. There´s a lot of sentimental value with that race and I hope to race there.”

Johnson is set to retire at the end of this disjointed NASCAR season but is considering several different series afterward. His NASCAR journey on Sunday stops at Indianapolis, host of a historic IndyCar-NASCAR doubleheader this weekend, and where Johnson will try to join Michael Schumacher and Jeff Gordon as the only five-time winners in track history.

He is stuck in a three-year losing streak but Hendrick Motorsports has been dramatically improved this season and Johnson has been competitive. He has also been actively prepping for a whirl in an Indy car and had been scheduled to test with the McLaren team before the pandemic.

Now he will get on track for Ganassi in five-time champion Scott Dixon’s car and has been picking Dixon’s brain headed into what he considers to be a tryout.

“It´s a test, it´s a tryout and it´s a two-way street. Two-way tryout for the team to look at me and for myself to look at a team,” he said. “If I´m about four seconds off the pace, then that´s probably a quick sign that I don´t need to be in one of these cars. If I´m within a certain amount of time and I have a good feel of the car, then for me, I feel like that´s an important first step that I need to know that I can be competitive.

“I do not want to go race in any series and not be competitive,” he said.