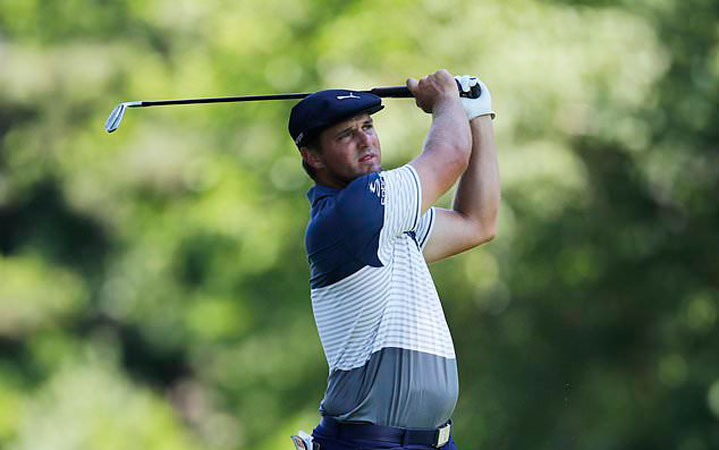 DETROIT: Bryson DeChambeau chose to compete in the Rocket Mortgage Classic while many of the PGA Tour’s top players skipped the tournament. He’s aiming to take full advantage of the relatively weak field and course. DeChambeau had four birdies on his back nine Friday to close with a 5-under 67, giving him a share of the lead among the early starters in the second round. And it sounds as if DeChambeau has a plan to win for the first time this season and sixth time in his carer. “If I can make birdie on all the par 5s on the weekend, that´s 8 under right there,” he said. “Make a couple birdies on some short par 4s, I feel like that would be a good number.” Matthew Wolff (64), Seamus Power (66) and Mark Hubbard (66) also were in front at 11-under 133 after the first wave of players finished their second round. Chris Kirk gave himself a chance to finish the day with the lead alone. Kirk started his second round with a 6-under 30 on the front nine and added two birdies early on his back nine after shooting 5 under in the opening round.

Kevin Kisner and Sepp Straka were at 10-under 134, a stroke behind the early leaders. In the PGA Tour’s first three events after the COVID-19 pandemic stunted the season, the top five players in the world ranking participated in each tournament. None of the top five players is at the Detroit Golf Club and the field includes just 18 of the top 50. DeChambeau, the only PGA Tour player with top-10 finish in each of the last three tournaments, is ranked No. 10 in the world. He had a bogey-free second round after overcoming bogeys in the opening day. “Coming off with a clean card makes me feel really good, and finishing off with a birdie gives me some inspiration,” DeChambeau said. Power, who made the cut in just four of seven previous starts this season, had three birdies on the front and back nine to seal a spot for him to play this weekend. Hubbard had six birdies and was about an inch from another one on an uphill, 29-foot birdie putt at No. 18 with a chance to take the early lead. The 21-year-old Wolff put himself in position to take the the lead by himself with six straight birdies and eight over his first 10 holes after missing the cut in each of last two events.