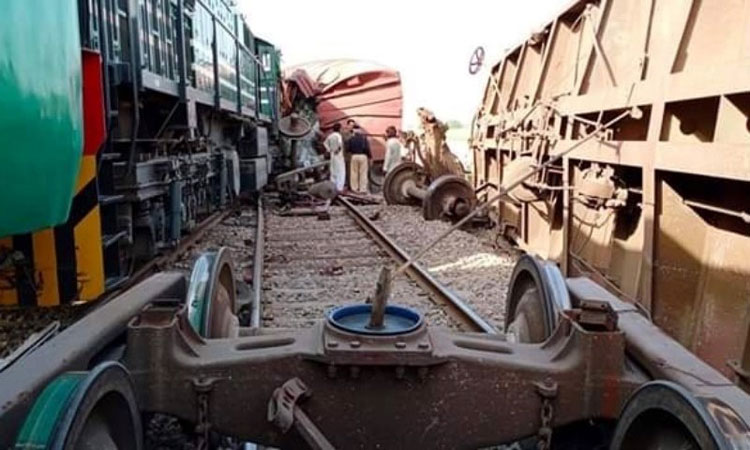 Two people got minor injuries as two trains collided in Khanpur area of Punjab, according to a statement issued by Pakistan Railways.

According to a spokesperson for Pakistan Railways, Shalimar Express train, travelling from Karachi to Lahore, collided with Down 502 cargo train at 4:10pm near Jheeta Bhatta railway station. The spokesperson added that the train’s driver and assistant driver were ‘mildly injured’ in the collision while all the passengers remained safe. “However, two coaches of the cargo train damaged while the front trolley of Shalimar Express front engine derailed,” he added. The divisional superintendent Multan reached the location of the accident besides other divisional officers and rescue officials and undertook the rescue operations.

The incident comes a day after a train rammed into a passenger coach at the railway track passing through Sucha Soda, a small town near Farooqabad in Sheikhupura district, killing 22 people including 20 Sikh pilgrims, a driver and his helper. The tragic incident, when also left nine people injured, took place at a small unmanned level crossing/passage, just about 100 feet away from a manned level crossing at the track. Railways Minister Sheikh Rashid Ahmad Saturday said that negligence of the coaster driver is the cause of the train accident near Farooqabad. Addressing a press conference at PR headquarters, he said that the coaster driver tried to cross the railway track from an unmanned level crossing avoiding a gate crossing which was closed due to the train arrival.