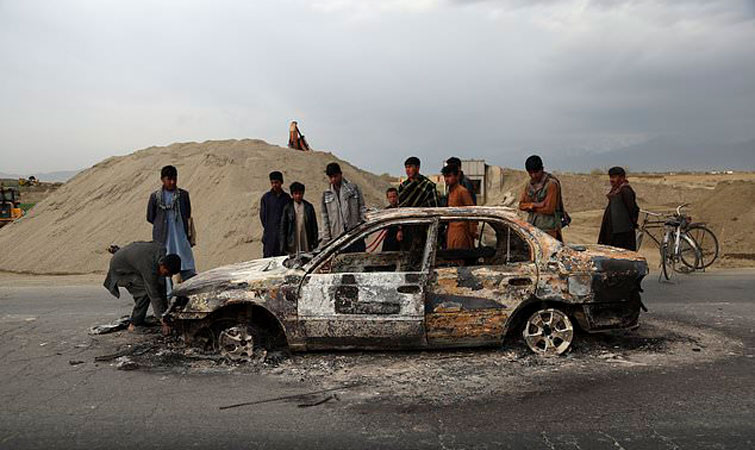 Intelligence that Afghan militants might have accepted Russian bounties for killing American troops did not scuttle the US-Taliban agreement or President Donald Trump´s plan to withdraw thousands more troops from the war.

It did give critics of the deal another reason to say the Taliban shouldn´t be trusted.

The bounty information was included in Trump’s president’s daily intelligence brief on Feb. 27, according to intelligence officials, and two days later, the US and Taliban signed an agreement in Qatar. The agreement clears the way for America to end 19 years in Afghanistan and gives Trump a way to make good on his promise to end US involvement in what he calls “endless wars.”

On March 3, three days after the agreement was signed, the president had a 35-minute phone call with Mullah Abdul Ghani Baradar, a co-founder of the Taliban and head of their political office in Qatar. After reports of the bounties broke in late June, Secretary of State Mike Pompeo had a video conference with Baradar to make it clear that the US expects the Taliban to live up to their commitments,

Under the agreement, the US will pull all its troops out of Afghanistan by May 2021. So far the US has reduced US troop presence in Afghanistan from 12,000 to 8,600 – a target reached ahead of schedule. Now, Trump is considering when and how quickly to further shrink the US military footprint.

The Taliban committed to reducing violence, cutting ties with al-Qaida and sitting down with other Afghans to craft a political road map for their country’s future. The Taliban have pledged to ensure that the areas they control – about half the country at this time – are not used by militant groups to target the US and its allies.

On Saturday, Washington´s envoy to Afghanistan emphasized the economic benefits of the deal, which has run into new political obstacles. Zalmay Khalilzad was wrapping up a weeklong trip that included stops in Uzbekistan, Pakistan and the Gulf state of Qatar, where Taliban negotiators are headquartered.

Critics of the deal like Rep. Mike Waltz, R-Fla., say the agreement is simply a “cover for withdrawal.”

“I have serious concerns with how this agreement has been pursued,” Waltz said. “The Taliban has shown repeatedly – through violence and bombings both before and after the deal was signed – that they are not serious about adhering to their end of the bargain.”

The White House insists the president was not aware of the intelligence but that the administration responded to the information to protect troops. Administration officials say Russia – along with other countries, including Iran – have been providing the Taliban money and guns for years, although bounties would signal stepped up Russian aggression.

Military experts note that the Taliban didn’t need any monetary incentive to kill Americans. They also point out that the US worked against the Soviets in the late 1980s, providing militants with shoulder-held anti-aircraft Stinger missiles, which turned around the course of the war and sped-up negotiated Soviet withdrawal from Afghanistan.

“Bounties or not, what we judge the Taliban on is whether they honor the deal,” said Scott Smith, an expert on Afghanistan peace processes with the US Institute of Peace.

Both Republican and Democratic lawmakers, defense officials and Afghan experts claim the Taliban has not taken steps to live up to the now four-month-old agreement and they are skeptical the Taliban will ever break with al-Qaida, which conducted the 9/11 attacks.

The US general overseeing American military operations in Afghanistan, Marine Gen. Frank McKenzie, said in mid-June that he is dubious of the Taliban´s intentions to fulfill its commitments, suggesting that he would not favor a rapid US withdrawal. McKenzie said it is an open question whether the Taliban will keep Afghanistan from being the launchpad for attacks on the US

“They have not yet completely made that case,” McKenzie said, adding that “time is now beginning to grow short.”

Mike Morell, former CIA acting and deputy director, told the House Homeland Security Committee’s intelligence and counterterrorism panel on June 24 that the Taliban is militarily and politically stronger than at any time since 2001 when the Taliban refused to hand over al-Qaida leader Osama bin Laden, who orchestrated the 9/11 attacks.

“I believe that the Taliban, in its peace negotiations with the United States, have told us what we want to hear in order to encourage us to leave the country,” Morell said.

Thomas Joscelyn, a long time critic of the deal at the Foundation for the Defense of Democracies, said the Taliban have repeatedly said al-Qaida has not been in Afghanistan since 2001. “Without any verification or enforcement mechanisms – and there are no such provisions specified in the text of the deal released to the public – there is no reason to think the Taliban is telling the truth now,” he said.

The Defense Department’s latest report on the war said the Taliban has stepped up violence against Afghan forces, but has avoided attacks on US or coalition troops.

The militants have joined with Afghan and US forces in hitting Islamic State fighters hard, pressuring the group to relinquish control of an area in eastern Afghanistan. But IS still has the ability to conduct mass-casualty attacks, the report said.

The report also said US-led counterterrorism operations have degraded al-Qaida, which now poses only a “limited threat” to the US The Pentagon report said, however, that the Taliban maintain close ties to al-Qaida.

Pompeo says only a couple hundred active al-Qaida fighters remain in Afghanistan. On Thursday, Pompeo hinted, without elaborating, that he’d seen indications that the Taliban are no longer going to let al-Qaida operate in Afghanistan.

“I can´t talk about the things that I have seen,” Pompeo said on Fox News Channel´s Special Report. “But know this. I spoke with the Taliban again just this week in an effort to further the peace negotiations to try to get them to the table with the Afghan government.”

However, a May report by the United Nations says al-Qaida is “quietly gaining strength in Afghanistan while continuing to operate with the Taliban under their protection.” The report says 400 to 600 al-Qaida operatives are active in 12 of Afghanistan 34 provinces. The U.N. report also reported six meetings between al-Qaida and Taliban senior leaders during the past 12 months – while US-Taliban talks were ongoing.