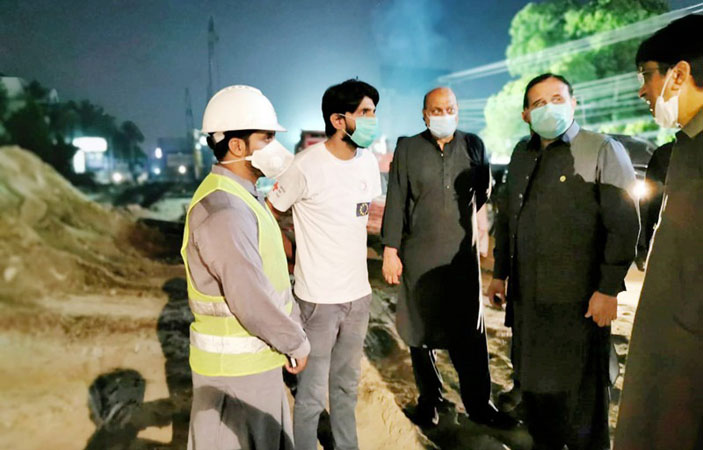 On the instruction of Punjab Chief Minister Sardar Usman Buzdar, it has been decided to devise an economic plan for urban infrastructure.

A meeting of Board of Punjab Public-Private Partnership Authority was held under the chair of Punjab Chief Minister Sarfar Usman Buzdar at CM House. Administrative and financial rules of the authority were got approval in the meeting. The decisions of second meeting of Policy & Monitoring Board were ratified in the meeting as well. The meeting also reviewed the pace on development projects being completed in collaboration with private sector. Advisor to CM Dr Salman Shah, MPA Khadija Umer, Chief Secretary, Chairman Planning and Development, Senior Member Board of Revenue, experts on financial matters, concerned secretaries and other high ranked officers were present on this occasion. Commissioner Rawalpindi Division also attended the meeting via video link.

Meanwhile, Chief Minister Usman Buzdar paid a surprise visit to Firdous Market underpass project without protocol. The administration and authorities remained unaware about the CM’s visit. Usman Buzdar himself drove to the site and inspected the construction work and talked with labours working on the project. The chief minister directed to complete the project before the stipulated timeframe. He said that earliest completion of Firdous Market underpass will provide better transportation facilities to the citizens. He said that the underpass is a dual carriageway from both the sides and 540 meters long. He said that government has save Rs 130 million in construction cost through transparent tendering. Usman Buzdar said that he is personally monitoring the progress of this important project of Lahore like the projects of backward areas.

The Chief Minister said that he will revisit the site to inspect the progress on construction work. He said that national resources were looted mercilessly in the past. The present government is the custodian of every single penny of national exchequer. He said that this project has been planned keeping in view the difficulties being faced by the people. Completion of the project will result in saving precious time of the public as well as the fuel, he added.

Meanwhile, an important meeting of Punjab Cabinet Committee on coronavirus held at CM’s Office to review the measures taken to deal with the spread of pandemic. The meeting also reviewed the preparation of SOPs and other necessary arrangements for Eid-ul-Adha. Chief Minister Usman Buzdar directed to set up cattle market 15 days before Eid-ul-Adha outside the premises of cities boundaries and said that SOPs should immediately be finalized in this regard.