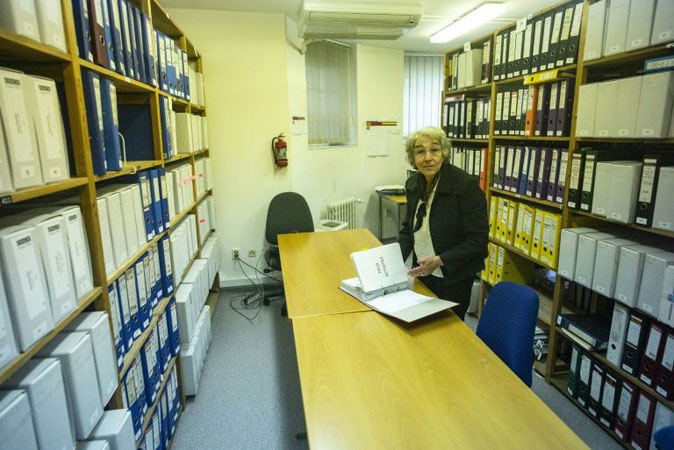 They are gathering dust on shelves, but could make war criminals tremble: the archives of the OSCE, an international organisation addressing security-related concerns, are increasingly becoming a source for those who seek to prove abuses committed during conflicts in Europe.

The field reports of the observers of the Organization for Security and Cooperation in Europe — stacked in an elegant white villa on a leafy hill on the outskirts of Prague — document conflicts on the continent since 1975.

No media have until now been allowed access, according to the OSCE, as the organisation — set up during the Cold War to build trust between the West and the Soviet Union — usually doesn’t seek publicity to continue collecting information from the ground as much as possible.

But it is here that famous prosecutor Carla Del Ponte combed through documents for the 2002 indictment of former Serbian president Slobodan Milosevic.

Documentalist Alice Nemcova, who reigned over this universe of cardboard boxes enclosing billions of yellowed A4 sheets from 1991 until last month, has seen the collection gain in importance over the years.

The UN established the ICTY in 1993 to try perpetrators of war crimes committed in the ethnic violence that followed the break-up of the former Yugoslavia in the 1990s.

Milosevic, who faced 66 counts including genocide, war crimes and crimes against humanity in the former Yugoslavia, was never convicted as he died in prison in 2006 during the trial.

However, others accused by the tribunal have been found guilty and jailed. “The International Criminal Court (ICC) also made a request concerning Georgia in 2012,” Nemcova revealed. Four years later, the Netherlands-based ICC launched an investigation into the conflict between the Caucasus country and Russia. The Kosovo Force (KFOR), the NATO-led troops tasked with protecting Kosovo for the past two decades, also applied for access to the OSCE in 2017, as did the Red Cross, which was looking for people who had gone missing in conflicts.

The OSCE is an important source of information because it “specialises in questions of democracy, freedom and minority rights” and is a constant presence on the ground over an area larger than that of the European Union or NATO, said researcher Nicolas Badalassi.

From Vancouver to Vladivostok, the Vienna-based OSCE has 57 member states, and its archives are “enormous”, said Badalassi, who lectures contemporary history at the Institute of Political Studies in Aix-en-Provence, France.

OSCE is the only international organisation to have immediately gone to the crash site of Malaysian Airlines flight MH17, which was shot down by a Russian-made missile over rebel-held eastern Ukraine in 2014, killing all 298 people aboard.

A trial opened in March in the Netherlands against four men — three Russians and one Ukrainian — accused of downing the plane.

The OSCE has had observers in the rebel-held eastern Ukraine for years to monitor the conflict there.

“In the future, it is clear that the reports in Ukraine since the start of the war in 2014 will be an invaluable source for justice,” Badalassi said.

“In fact, I don’t see anyone else describing the crisis as seen from the inside. Besides, observers have even been kidnapped — to hinder their work.”

Even after the Cold War, the OSCE also maintained offices in many countries and regions, including those accused of authoritarianism, such as Chechnya and Belarus.

It also sends election observers regularly to monitor polls around the world.

But not everyone looks towards the OSCE archives kindly.