‘Country’s sovereignty will be protected at all costs’ 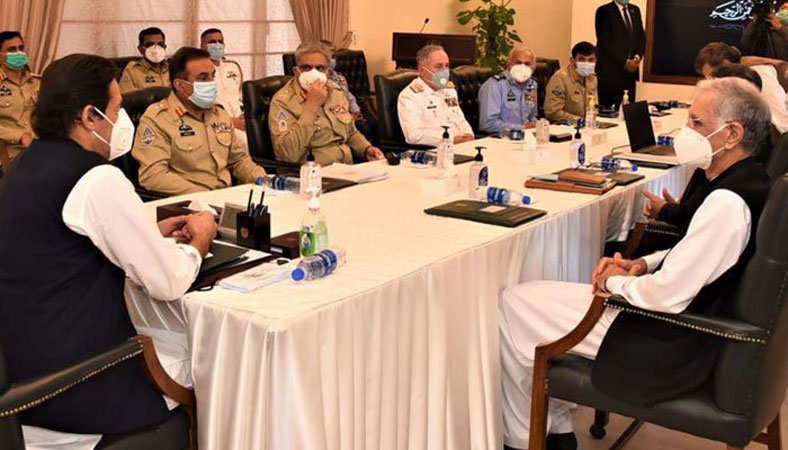 A high-level meeting held under the chairmanship of Prime Minister Imran Khan on Friday reviewed internal and external security situation and expressed the resolve that sovereignty of the country would be protected at all costs.

The meeting agreed that Pakistan believed in peaceful co-existence with its neighbours, however expressed the “will and capacity” to defend people and territorial integrity.

The meeting voiced serious concern over the continued human rights violation by Indian forces in the Indian Occupied Jammu and Kashmir and urged the international community to take notice.

The meeting also paid glowing tributes to the bravery and coordinated efforts of law enforcement agencies that successfully thwarted the recent attack on Pakistan Stock Exchange.

Meanwhile, Prime Minister Imran Khan said on Friday that the China-Pakistan Economic Corridor (CPEC) project is the sign of strong friendship between the neighbouring countries and it assures the bright future of Pakistan.

PM Imran Khan chaired a high-level session to review the progress of projects designed under China Pakistan Economic Corridor which was attended by federal ministers and CPEC officials. The premier was briefed over the current status of different projects being completed under the CPEC plan.

PM Khan expressed satisfaction over the performance of CPEC Authority and said that the economic corridor was a best plan to bring socio-economic development which also assured the bright future of Pakistan.

The premier vowed that the federal government will complete the CPEC project as per plan at any cost. The project was a sign of all-weather friendship between Pakistan and China. He added that every Pakistani will be benefitted from the mega project.

He directed concerned officials to further enhance the performance and capacity of the CPEC Authority for the early completion of the ongoing projects.

An agreement signing ceremony had held between CPEC Authority and Chinese companies in Taxila. Asif Saleem Bajwa had elaborated the phase-II of the mage project has been started, which will provide further investment opportunities to foreign investors in Special Economic Zones.

At least 80 energy projects have been completed while 9 projects are under completion, he said, adding that two energy projects will also be the part of phase-II. Asim Saleem Bajwa invited foreign entrepreneurs to invest in Special Economic Zones in Pakistan.

Separately, the foreign ministers of Pakistan and China have agreed in a key telephone conversation to promote mutual cooperation between the two countries on international forums.

The foreign minister told his Chinese counterpart that India was constantly violating the Line of Control ceasefire by targeting innocent civilians in order to cover up its internal failures.

Wang Yi said that he appreciated Pakistan’s efforts for peace in the region and thanked Pakistan for its support in every difficult moment.

Wang Yi said that CPEC Phase II is a very important part of the BRI project as it will increase economic activity and create new employment opportunities in Pakistan. The two Foreign Ministers agreed to continue consultations on important regional and global issues as well.