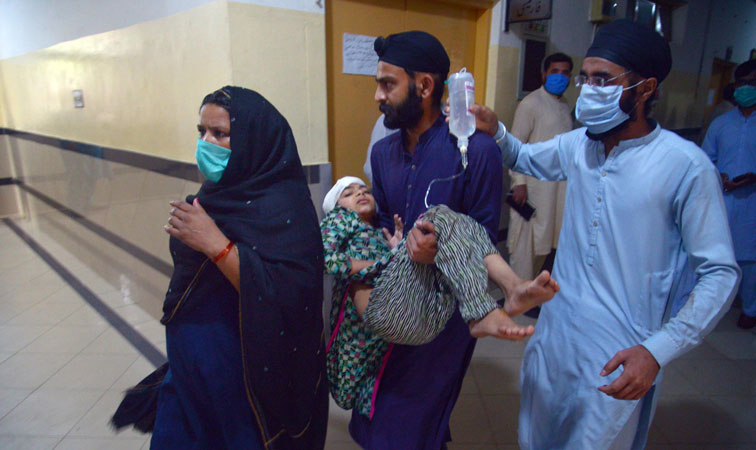 At least 20 people have been killed in a crash between a coaster and the Shah Hussain Express train near Sheikhupura, DPO Mohammad Ghazi Salahuddin said.

According to Rescue 1122 officials, at least eight people have been injured in the accident, all of whom were shifted to District Headquarters Hospital, Sheikhupura. The bodies were also shifted to the DHQ hospital.

Rescue officials from both Railways and Rescue 1122 arrived at the scene of the accident and provided first aid to the injured, a statement by the Railways Ministry said. All divisional officials were also directed to reach the crash site.

The accident occurred around 1:30pm at a crossing near Sheikhupura that was reportedly unmanned. Following the accident, the divisional engineer was suspended by the ministry, the statement said.

Sheikhupura DPO Salahuddin, while talking to reporters, said that 25-26 people were travelling in the coach, out of whom 20 had been killed in the accident. The victims include women and children as well.

According to the DPO, the passengers in the coaster were Sikh Yatrees who were returning from Nankana Sahib – where they had gone to visit relatives – to Peshawar. He added that there were two more coaches that took a different route and are safely on their way.

As opposed to the initial reports that suggested that the crossing was unmanned, the DPO said that the gate was closed. He said that it seemed like the driver had tried to take a shortcut instead of waiting at the crossing, which resulted in the crash. He added that facts will only be clear after an investigation.

Minister for Railways Sheikh Rashid has ordered authorities to take immediate action against those responsible for the accident.

In a tweet, Prime Minister Imran said he was “deeply saddened” by the train accident and that he had directed officials to ensure that proper medical care is provided to the injured.

“My condolences and prayers go to the families of the deceased. [I] have directed relevant authorities to ensure facilitation and care for all the families,” he said.

The premier announced that the Railways’ “operational safety SOPs will be reviewed immediately”.

Punjab Chief Minister Usman Buzdar expressed sorrow at the loss of lives in the train accident and conveyed condolences to the families of the deceased.

According to a statement, the chief minister directed the health department to provide all facilities possible to the injured.