Only verified intelligence? A look at US presidents’ briefings 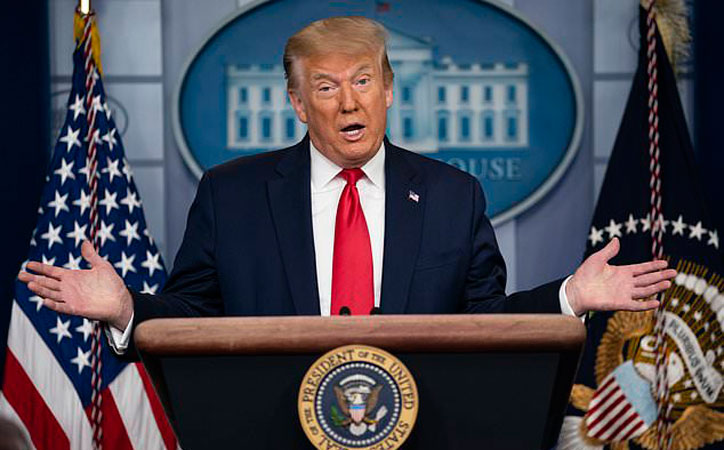 The White House says President Donald Trump was never briefed on intelligence that Russia had put a bounty on US soldiers in Afghanistan because there wasn´t corroborating evidence.

But former intelligence officials say presidents are routinely informed about intelligence even when it´s not definitively confirmed. Intelligence that may be on shaky ground today may foreshadow tomorrow´s calamity.

Some questions and answers about how presidents are briefed on intelligence, what sort of information they receive and how this applies to the situation with Russia:

Both orally and through a written document known as the President’s Daily Brief.

The PDB, as it is known, is a compilation of intelligence and national security assessments from government analysts. It’s material the intelligence community thinks the president should know. The document has been provided to presidents in some form since Harry Truman occupied the White House. Some presidents are said to have been voracious consumers of their briefings; Trump, by contrast, is known to demand only the sparest details.

Today, the PDB is coordinated by the Office of the Director of National Intelligence and includes contributions from the CIA and other members of the intelligence community who effectively pitch stories for inclusion, said Rodney Faraon, a former CIA analyst who served from 1999 to 2001 on the briefing team for the White House.

“It’s not unlike what you would see in a journalistic newsroom,” he said.

WHAT SORT OF INFORMATION GETS BRIEFED TO A PRESIDENT, AND HOW DO AGENCIES KNOW IF IT’S CREDIBLE?

Depending on the day, and the particular interests of a president, the PDB could include the latest inside information about a country a president is preparing to visit, intelligence about potential national security threats or other secrets relating to current events.

“There´s no mathematical formula” for deciding what gets briefed to the president, said David Priess, a former CIA intelligence briefer and author of “The President´s Book of Secrets: The Untold Story of Intelligence Briefings to America´s Presidents.”

“The job of the analysts is to decide, `does the president need to know this today?´ You are writing for the president,” he added.

There’s also no mathematical formula for evaluating the credibility of intelligence. Sometimes, information is deemed reliable because it comes from a trusted source, because it matches up with a separate piece of intelligence or fits into a pattern, or because it derives from surveillance or intercepted recordings.

“You’re not going to put garbage in front of the president,” she added.

DO PRESIDENTS RECEIVE INTELLIGENCE ONLY WHEN IT’S CONFIRMED?

Absolutely not. If that were the case, the PDB would be both brief – since intelligence deals more often with uncertainty than fact – but also boring, restricted to observations that are obvious and likely already known to the president, Priess said.

“Because it’s intelligence, that means it deals with the unknown, things that are uncertain – but things that are of grave importance to US national security and worthy of the president’s attention,” he said. “Nothing in there says that it has to be fully verified or certain because intelligence is rarely certain.”

Modern history is loaded with examples of briefings to presidents that contained warnings, or informed suppositions, but not certifiable facts.

One month before the Sept. 11, 2001, attacks, President George W. Bush was famously warned in a PDB that Osama bin Laden was determined to strike the US The intelligence, including chatter picked up by counterterrorism analysts, was seen as urgent and credible enough to bring to the president’s attention though it lacked details about date, location and method.

Nearly a decade later, President Barack Obama’s advisers alerted him to their belief that bin Laden was in a compound in Pakistan – despite disagreement over the strength of that intelligence. Obama still approved the operation that killed bin Laden.

In his book, “The Great War of Our Time: The CIA’s Fight Against Terrorism from al-Qaida to ISIS,” former CIA Deputy Director Michael Morell writes that his confidence level was at 60 percent. Other analysts felt more secure.

When Obama asked about the disparity, Morell said it reflected differences in individual experiences but not differences in the information people had.

WHY WOULD A PRESIDENT RECEIVE UNCORROBORATED INFORMATION?

Intelligence that may be on shaky ground today may precede an actual crisis, so briefers are expected to ensure that presidents have the fullest possible picture to prepare for something that may soon require maximum attention.

That’s especially true when even unclear or uncorroborated intelligence indicates that American lives or infrastructure could be at risk.

“The president is going to get hard decisions, and those hard decisions normally come with murky facts and gray areas,” said Larry Pfeiffer, a 32-year intelligence community veteran and chief of staff to the CIA director during the Obama administration.

To account for the uncertainty, briefers will caveat the information and detail internal disagreements among different intelligence agencies so that presidents understand a situation’s nuance.

HOW DOES THIS APPLY TO THE SITUATION WITH RUSSIA?

White House officials have repeatedly insisted that the president had not been briefed that Russia offered bounties to Taliban-linked fighters in Afghanistan to kill American troops, though officials have told The Associated Press and other news organizations that the information was included in the President’s Daily Brief.