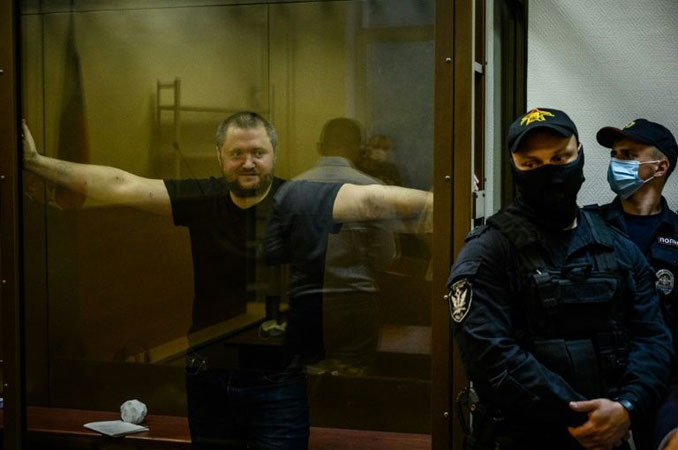 When police moved in to arrest Vladimir Vorontsov in May, they didn’t bother to knock.

Instead, two commando teams stormed the former policeman’s top-floor apartment in southeast Moscow at around 7:00 am, one abseiling down the high-rise while the other broke down the door.

“Our daughter thinks that bandits came and took daddy away,” Aleksandra Vorontsova told AFP, describing the swoop on her husband, an activist for police labour rights.

During a five-hour search, investigators even combed through their four-year-old’s toys, socks and underwear, she said.

Vorontsov, who quit the Moscow police force in 2017 after 13 years, has been charged with extortion.

Supporters of the stocky, blue-eyed 35-year-old say that the real reason for his arrest is his Police Ombudsman project, a series of linked social media accounts dedicated to protecting police officers’ rights and exposing abuse by their superiors.

His case has sparked a rare public outcry among police, a key pillar of President Vladimir Putin’s rule, that could eventually spell trouble for the Kremlin, observers say.

Vorontsov has spent two months in pre-trial detention and on Thursday a Moscow court extended his arrest until early August.

He denies any wrongdoing.

With no genuinely independent police trade unions in Russia, Vorontsov’s initiative has become popular, attracting more than half a million followers.

It has exposed allegations of corruption within law enforcement and denounced pressure on officers to fulfil quotas for fines and arrests.

It has also drawn attention to long working hours and suicides in the police force, for which precise figures are not publicly available.

Vorontsov has criticised excessive use of force by police and supported claimants’ successful legal court cases.

For the first time, members of Russia’s 750,000-strong police force have openly challenged the authorities over Vorontsov’s treatment but also on the functioning and methods of the police, at a time when policing in the United States is under intense scrutiny following the death of George Floyd.

Dozens of serving and former police staff in Russia have taken to social media to call for Vorontsov’s release.

Some posted photos of themselves, others released anonymous pictures of their police hats and protest signs.

Several have told AFP that it was important to support Vorontsov despite possible repercussions.

Two days after his arrest, former neighbourhood police inspector Georgy Zarya marched to Moscow police HQ for a one-person demonstration — the only kind allowed in Russia without prior permission — and held up a sign urging the city’s police chief to resign.

He was detained for two hours.

“If we don’t stand up for Vorontsov now, things will only become worse,” the 36-year-old said.

While on the job, he’d made no secret of his disdain for the notorious system of quota-based policing, in which staff are often required to issue a predetermined number of fines or make a certain number of arrests.

“The quota system is the bane of the interior ministry,” Zarya said.

“If you don’t expose an administrative offence, you may not be able to hand in your service weapon in the evening. And how can you go home with a gun?” he said in an interview.

After more than 12 years on the force, Zarya now has nowhere to live as he has not received a housing grant to which he is entitled.

Vorontsov has helped him file a lawsuit against the interior ministry.

Mikhail Tsaplin also spoke out in support of Vorontsov, two weeks before retiring from the police in the town of Gus-Khrustalny, 250 kilometres (155 miles) east of Moscow, after 20 years.

Dressed in uniform, he posted a picture of himself on VKontakte, the Russian equivalent of Facebook, with the words: “I am/We are Vorontsov. I am not afraid.”

“He is neither a terrorist, nor an extremist, nor a murderer, nor a child molester,” he told AFP in a phone interview.

Tsaplin retired, he said, because he no longer wanted to be part of a flawed system.

“I can no longer wear a uniform,” he said. “I don’t like what’s happening. The system is crumbling from within.”

Tsaplin, who was paid a monthly salary of 43,000 rubles ($620) — above the average for his region — said that while ordinary police lived modestly, some senior officers were deeply corrupt and gave the force a bad name.

A police investigator from a major Russian city said that he and a colleague had become targets of an internal probe after posting pictures of themselves supporting the activist.

He fears he could be fired from the job he “loves”.

The investigator, who spoke to AFP on condition of anonymity, said that Vorontsov was a hate figure for the authorities because he encouraged police to stand up for their rights.

“The government has taken away everything from us,” he complained, stressing that police officers can be sacked for taking part in demonstrations and that election results in Russia were largely predetermined.