Kirsten Dunst talks about ‘On Becoming a God in Central Florida’ 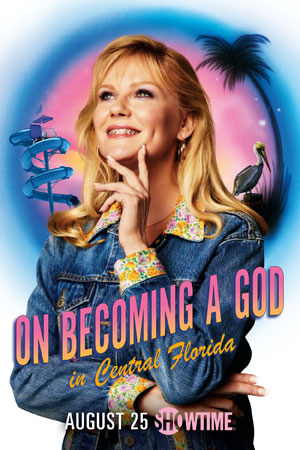 Kirsten Dunst in a candid chat talks about her show On Becoming A God In Central Florida. The Upside Down actress revealed about what made her take up this project, her character Krystal and more. Here are the excerpts:

Did you Bedazzle your own dresses for this show?

Oh, I wish! I know Stacey our costume designer had an airbrush session with all the wardrobe team so some of those shirts and sweatshirts made it into the show

How much of 90’s fashion is reflected in the show?

What was it about this project that made you want to be involved?

I read a lot of material and this script was one of the best pilots I’ve ever read, and the character is just so great to play. It is hard to play real complicated women where I just get to do so much crazy stuff in the show and it just made going to work and as an actress I’ve been doing this for so long so this was a part that really excited me.

There is a scene in the first episode where she says to Travis, “I don’t beg.” Does this exemplify who Krystal is?

Well she knows that it is hard to survive out there. Based on her childhood, I think she comes from you know a really sad situation and she’s found a husband and now he’s kind of losing it a way so now she has to kind of awaken him and help him get a grip on what he’s doing to his family and her.

What is this show about for you?

On Becoming A God for me is about a woman trying to survive with her daughter and make a living in a way that forces her to do some really shady things, even turn against her neighbours, her friends. When you’re a single mom, you do what you can to survive.

The title of this show is unique. What does the title mean to you?

On Becoming A God In Central Florida to me is about the falsehood of the American Dream and making money you know, having that be the end all, be all and being sucked in by this multi-level marketing scheme which is fam and what that’s doing to people

What does FAM represent to Krystal?

I think FAM represented at first something that really helped her husband, got him sober, gave him a mission. There were so many promises of so much money coming in and then Krystal starts to realize oh we are actually giving all money out and using all FAM products and basically we’re not making any money from this and he’s so obsessed with this, in climbing the leaders of FAM and to get to the highest point, make the most money, be your own boss. All these ideas really just nothing is coming to vision. Krystal’s the only one with head on her shoulders

Where does this show take place and at what time?

The show takes place in Orlando Florida, just outside Orlando and Krystal is working at kind of a jankie water park that hopes to get the Disney crowd but really just is pathetic in run down so she’s like living kind of a.. I think Krystal’s happy though she has her daughter and her husband and her house which was kind of a big goal for her so for her, she has it all even though it is a pretty simple life.

Who is Krystal when we first meet her?

What is FAM to Krystal?

I think FAM at some point was probably a saviour to her husband, got him sober and now FAM is, she’s almost forced to stay in FAM cause she has all these products so she has to get rid of it. It forces her into playing the game which she never wanted to play and then when she starts to get good at it, she realizes she can kind of use this to her advantage.

So how does it feel now that this show is finally coming out?

Now that it’s actually coming and on such a great network, I couldn’t be happier when I first saw the promos. I think I even welled up a little. It was like it’s nice to be at home where people get it and understand it and are ready to take this ride altogether and have fun on the other end of it all.

So what is FAM?

FAM stands for Founders American Merchandise and it is a multi-level marketing scheme. People buy product, they try and move up the ladder. They have down lines and up lines and the head of this whole marketing scheme is this man Obie Garbeau II.

How would you describe Obie?

Obie is a narcissistic money hungry man that I would say is the worst part of what the American Dream is which is owning people, lying to people

Why do you think Travis and Cody are so in love with Obie?

I think the message is Obie Garbeau puts on these tapes to really brainwash people into believing that becoming your own boss and you know, say no to the man even though what they are doing is exactly following this guy, it almost becomes cult like. They are believing essentially that they will make a ton of money from these FAM products and become their own boss and have followers and grow up the ladder and be multi-millionaires

So who is below Obie in the down line?

Well Carole and her husband Carole are below Obie and they are people that are really putting up a show. They cannot afford all they are doing but it’s really all about a façade and 4 year down the line and so that façade just keeps going until you basically have no money anymore

Who is Cody and how would you describe him?

Cody is Travis’s upline so basically Travis just answers to him, goes to him for his products, everything, and he’s essentially Travis’s and partner in a way.

Theo and I read together for this. He was something that I, he is so naturally talented and I knew Theo was right for his role based on our chemistry and also the type of actor he is. He is very free and we always improvise together and just went with it. He is the kind of actor that makes it fun to get to work and work with so for me, we always like doing our scenes together the best, I think.

How would you describe Travis?

Travis is a desperate man. He wants to take us on vacations and for our daughter to get into a private school. He has all these big dreams and he’s so desperate to get them that he’s become an addict for FAM and it is just destroying our lives.

Who are Ernie and Bets and what’s Krystal’s relationship with them?

Ernie and I work at a water park together and him and his wife are next door neighbours so we are like close to them, they are like family. If I need a quick babysitter, Bets will always baby sit for me. They are like family-neighbour type of friends but what ends up happening is that Krystal needs more down lines so that she ends up gaining power in FAM, she manipulates and turns on her neighbours and gets them interested in FAM specially Ernie. She manipulates her friends and tries to get ahead for her own life. Ernie is going through a major depression for sure I think in this show. He’s having a breakdown and then weirdly enough, here comes FAM and it starts to help him and he starts to believe in this scam as well.

On Becoming a God in Central Florida streams on SonyLIV from 3rd July 2020.