The car used by the terrorists to reach the target was spotted in a TV drama, Investigators are hard at work to make headway into the attack on the Pakistan Stock Exchange (PSX) this week. 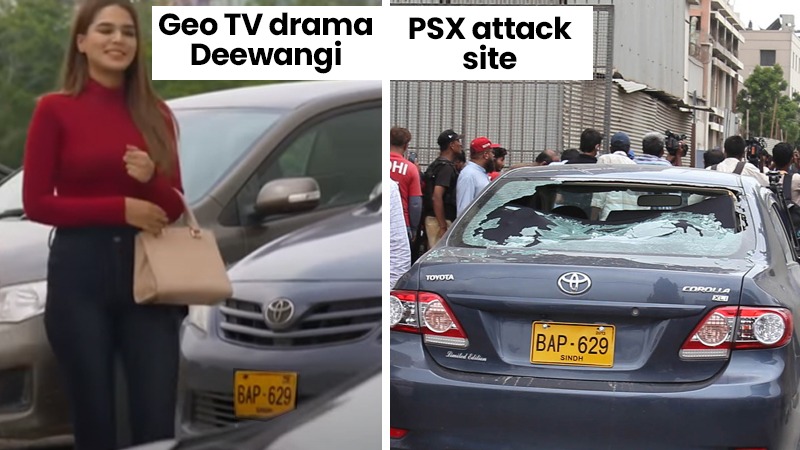 As per to sources, the car which the terrorists used to get to the Pakistan Stock Exchange was seen in an episode of the TV drama aired on a private entertainment channel last Wednesday.

The scene in question is from Deewangi’s 33rd episode, where two characters from the serial can be seen walking and talking in an open parking space at Hill Park. A car with the same number plate as the one used in the PSX attack can be seen in the foreground as the actors walk past it.

The episode in which the car appeared aired on July 1, 2020, two days after the attack took place. However, the episode itself had been shot 10 months earlier, on August 30, 2019. Furthermore, the ongoing investigation into the PSX attack has revealed that the car was bought only recently by terrorists from a showroom in Karachi’s Sabzimandi area. The car was bought on June 24, four days prior to the attack.

The vehicle was registered in 2013 and is currently named on a bank, as confirmed by Sindh Excise Department.

A police officer and 2 security guards lost their lives while foiling the attack as 4 terrorists who had attacked the PSX building on Monday were also killed, Balochistan Liberation Army claimed responsibility for the attack.

Prime Minister Imran Khan while speaking on the floor of the National Assembly on June 30, had said Pakistan has no qualms that Monday’s terrorist attack on the PSX was orchestrated in India.