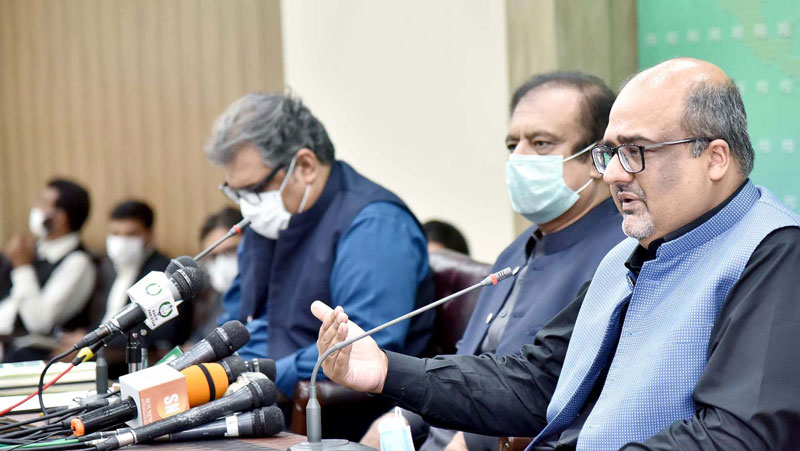 Federal Minister for Maritime Affairs Ali Haider Zaidi on Thursday said an inquiry into issuance of ‘illegal’ licenses to some 236 pilots from 2012 to 2018 is in progress.

“All the state institutions were destroyed during the decade-long rule of two parties, which issued licences to suspected pilots,” he said while addressing a press conference flanked by Minister for Information and Broadcasting Shibli Faraz and Special Assistant to Prime Minister on Accountability Shahzad Akbar.

Ali Zaidi said in March 2019, the Pakistan Tehreek-e-Insaf (PTI) government introduced a new aviation policy as its top priority was the safety of air passengers. He said after investigations, some 54 pilots were grounded. The inquiry into the irregularities committed in the aviation sector is underway, which will hopefully be completed within four months, he added.

The minister said after completion of the inquiry, the PIA will be purged of all irregular inductions and it will become an airline observing high safety standards. The PIA, which has provided its services to many foreign airlines in the past, will be restored to its past glory, he added.

Ali Zaidi said five senior officers of the Civil Aviation Authority have been suspended. It is imperative for a bright future of Pakistan that improvement be brought in all its institutions, he said, adding that investigations revealed that corrupt elements exist in every department, and those involved in such ‘illegal appointments’ will have to face accountability.

Replying to a question, he said accountability had been started from the top and whosoever was found involved in corruption and corrupt practices, would be brought to justice. He said same is the case in the Maritime Affairs Ministry, where no audit had been conducted during the last 10 years.

The minister said the vacant posts of Civil Aviation Authority will be filled on merit for which advertisements will be given. He said former minister Mushahidullah, who, he alleged, is known for staging dramas, inducted all his family in the PIA, but all such ‘rotten eggs’ will be thrown out for the betterment of departments.

To another question, he said licences of some 4,000 pilots in India are fake.

Special Assistant to Prime Minister (SAPM) on Accountability Barrister Shahzad Akbar said the CAA will complete the scrutiny process of suspected pilots and verification of the credentials of other aviation staff in a few days. “There would be no compromise on the safety of air passengers and that was why the verification process of pilots’ credentials would be completed at all costs,” he said.

He said the CAA is working round the clock to complete the scrutiny of pilots, engineers, and others by Friday or Saturday. He said the internal accountability of institutions is also underway as it is the most essential for the facilitation and safety of the people. The cases of 28 pilots, having dubious flying licences, has been referred to the federal cabinet for termination, he said, adding that irregularities committed in the institutions in the past cannot be allowed to continue.

Referring to former prime minister Shahid Khaqan Abbasi, he said it is conflict of interests in his case that he enjoyed dual positions at the same time – the chief executive of the county and the head of a private airline. He said the PIA had been ruined during the last 10 years whereas the personal businesses of the then rulers thrived. The regulators had compromised their authority and standards deliberately to give a boost to the private businesses of the rulers of that time, he added.

Regarding ban on the flight operation of Pakistan International Airlines in Europe and the United Kingdom, he said the government would take up the matter with the authorities concerned to review the decision.

Minister for Information and Broadcasting Senator Shibli Faraz said the PTI government under the leadership of Prime Minister Imran Khan is committed to ensure merit and transparency in all the national institutions. “The Pakistan International Airlines (PIA) used to be a prestigious airliner from 1960s to 1980s, but it was ruined by the political interference of governments during the last couple of decades. However, the present government is working to revive the old glory of the PIA, along with other all national institutions,” he said.

Shibli Faraz said the press conference is being held to reveal details about the decline of the national flag carrier. He said the PIA and other private airlines in Pakistan were continuing their flight operations with the fully qualified pilots, who had undergone the scrutiny process and were given a clean chit.

Replying to questions of media persons, he said before coming to the press conference he had seen on the television screens the press talks of Pakistan Muslim League-Nawaz leaders belonging to the Shahid Khaqan Abbasi group and then those of Shehbaz Sharif group, and now it was expected that some leaders of the Mariam Nawaz group would also hold a presser. He said none of the prime minister’s family members was part of the government unlike the PML-N regime when the then PM’s younger brother was the chief minister and the father-in-law of his daughter was the finance minister.