* For generations, artisans in this part of Buddhist-majority Myanmar have carved out a living from the marble, fashioning mostly colossal Buddha statues to be sold in the nearby city 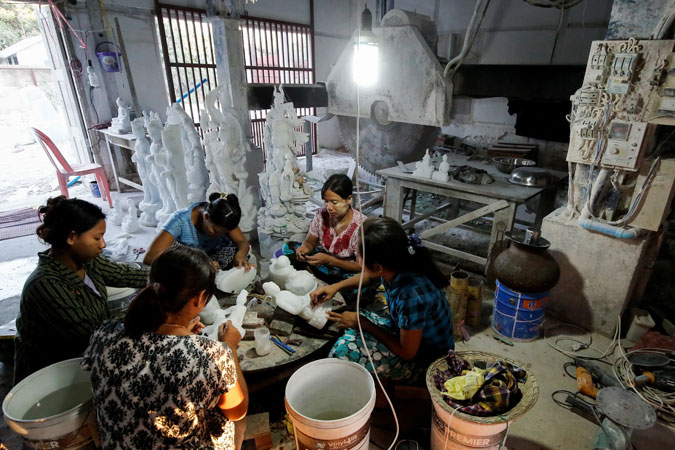 The fine white dust that shrouds much of his northern Myanmar village also covers sculptor Chin Win as he leans over a half-finished Buddha statue. “We are blessed to carve Buddha,” he said at his stone workshop surrounded by the seven white hills that give Sagyin village its name, which means “marble” in Burmese.

For generations, artisans in this part of Buddhist-majority Myanmar have carved out a living from the marble, fashioning mostly colossal Buddha statues to be sold in the nearby city of Mandalay or exported to neighbouring China and Thailand. Many of the several thousand villagers here earn a modest living from the marble mines, hauling the slabs down the hill, carving them into statues, or exporting them overseas.

Burmese marble, which ranges from pure white to bluish grey, is prized for its hardness and texture. A 45-tonne slab can sell for $40,000. In Sagyin, specks of the stone are used for everything from brushing teeth to washing clothes. “We grew up breathing the dust,” said Chin Win, 35, who has been carving statues since he was 11 years old. “We use it as toothpaste, for soap powder, lipstick.” The stone used to be chiselled by hand. Now, much of the work is done with machines.

“I was born in this village and for generations this is what we have done: the men work on marble carving and the women work in the marble mines or polish the marble statues,” said 25-year-old Mya Lay, in a house fashioned from dry bamboo sheets, with a floor made of marble chippings.

For years, she has walked down from the mines from morning till sunset carrying large marble slabs on her head, laborious work for about $3.50 per day. “If I could I would leave the village and find a job in the city,” she said, adding that she wanted a better life for her daughter.

Many of the several thousand villagers here earn a modest living from the marble mines, hauling the slabs down the hill, carving them into statues, or exporting them overseas

Some fear the clouds of dust that cloak the village could make them sick. Inhaling marble dust in other contexts has been linked to silicosis, a serious lung disease that can be deadly. Few workers wear masks or other protective clothing, and several nursed rasping coughs, although they said the coughing could also be the result of smoking.

Kyi Khaing, a workshop owner, said most residents are too poor to worry about their health.

“I think the marble dust is not safe, but most people here only focus on survival, rather than their healthcare,” he said. A bigger worry is the impact of the novel coronavirus, which originated in China late last year and has since spread globally, infecting more than 10.4 million people.

Myanmar has reported only 299 cases of the virus, and six deaths, but trade with China, which buys most of Sagyin’s statues, has been hit.

The closure of the border between the two countries has meant Kyi Khaing, 49, has been unable to export his wares.

“The finished products are just sitting still,” he said. “I haven’t been able to deliver them anywhere. The buyers stopped coming as well.”

“I believe until I die we will still have marble here,” he said. “Anywhere you dig, there are marble stones.”