‘The Truth’ — who wants a French screen-legend stand-off? 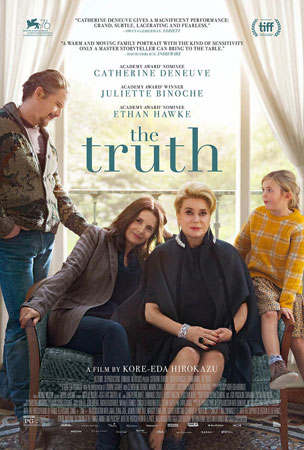 Seeing French divinities Catherine Deneuve and Juliette Binoche together is enough to make this movie a must-see – and that’s no lie.

Any flimsiness in the script by director Hirokazu Kore-eda, the Japanese filmmaker behind Shoplifters, After Life, and Nobody Knows, is quickly overcome by the sight of this dazzling duo in a duel of wits and conflicting emotions. Kore-eda may be working off his home turf, but his funny and sneakily touching film – his first in English – tackles the universally relatable topic of family bonds and how to stop them from fraying.

Deneuve plays Fabienne Dangeville, an aging icon of French cinema. The screen legend is about to publish her memoirs, an event that has brought her Manhattan-based, screenwriter daughter Lumir to her mère’s chateau just outside Paris, where Lumir grew up. Also bearding the self-absorbed lioness-in-winter in her den are Lumir’s easy-going, just-out-of-rehab husband Hank and their preteen daughter Charlotte. Hawke hold his own with these feminine forces of nature, which is fortunate since he’s playing a TV actor who nearly everyone relentlessly mocks.

Back to the memoir, which Lumir hasn’t read before her visit. When she does, the merde hits the fan since Fabienne’s portrait of herself as maternalism incarnate hardly squares with the way Lumir remembers her lonely childhood

Back to the memoir, which Lumir hasn’t read before her visit. When she does, the merde hits the fan since Fabienne’s portrait of herself as maternalism incarnate hardly squares with the way Lumir remembers her lonely childhood. Fabienne brushes off the criticism. To her, the truth is irrelevant to printing the legend she has nourished for years. In private, she bluntly admits: “I’d prefer to have been a bad mother and a bad friend but a good actress. You won’t forgive me, but the public will.”

Kore-eda busies up his film with subplots, including one about Sarah Mondavan, a deceased actress who mothered Lumir and rivaled Fabienne’s rep as France’s top leading lady. There’s also a sci-fi film that Fabienne is making with Manon, a young threat to Fabienne’s throne and a starlet so luminous that critics are comparing her to Sarah and not to Fabienne, who is playing her daughter. Yes, the film within the film has a neat twist: Manon, the mother, wards off aging and a terminal disease by living on a distant planet, leaving the daughter, played by Fabienne, to grow old on Earth. The life parallels are spot on, forcing Fabienne to reckon with how her daughter feels to have a mother that cinema, and not some magic planet, has made immortal.

And that’s the trouble. The real story here isn’t watching Fabienne work out her mother issues through a film role. Nor is it the men in Fabienne’s life: the ex-husband who shows up uninvited; the new lover who flatters her when needed; the longtime personal assistant who feels betrayed by not meriting a mention in Fabienne’s book. It’s the essential conflict between mother and daughter that brings The Truth into Kore-eda territory, where life is always a delicate balance. He’s lucky to have Deneuve and Binoche tempering the verbal fireworks with a tenderness that that allows for pain, regret and the hard-won knowledge that they must both face the truth to move on.