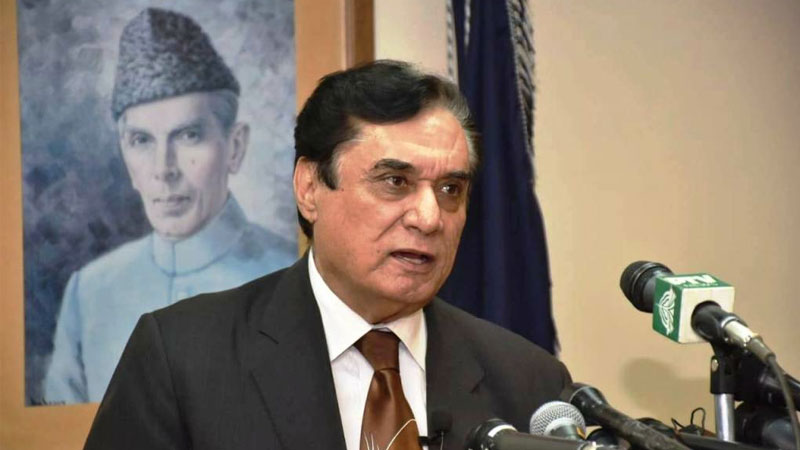 Honorable Justice Javed Iqbal, Chairman NAB, has said that eradication of corruption is top most priority of NAB. The present management of NAB has chalked out an effective and proactive anti-corruption strategy which has been acknowledged by Transparency International (TI), Pakistan, World Economic Forum, PILDAT and Mishal Pakistan.

He said that the initiatives taken by the present management of NAB started yielding excellent results. Similarly Gilani and Gallop’s survey indicated that 59 percent of people of Pakistan have full faith upon NAB which is ample evidence of NAB’s across the board accountability under the dynamic leadership of Honourable Justice Mr. Javed Iqbal, Chairman NAB.

Today due to NAB’s proactive Anti-Corruption Strategy, NAB’s overall conviction ratio is about 68.8 percent which is a remarkable achievement in investigation of White Collar Crimes in the world. He said that NAB has geared up and rejuvenated to eradicate corruption within all its forms and manifestations.

He said that NAB’s prime focus is on corruption and corrupt practices i.e.; money laundering, cases of cheating public at large, bank frauds, willful bank loan defaults, misuse of authority and embezzlement of state funds. Since NAB’s inception, one of NAB’s major achievements has been the recovery of around Rs.466.069 billion which is a great achievement as per the annual report of 2019 of NAB. Starting from the year 2017 which can be called basically a year of reinvigoration of NAB, we have moved with new zeal and effort after through detailed introspection and analysis of organizational weaknesses, overhaul of procedures and all pillars of the organization i.e. Operations, Prosecution, Human Resource Management, Training and Research and Awareness and Prevention have been reactivated.

He said that the overall complaints in 2019 were 53643 and processed 42760 whereas complaints in 2018 were 48591 and processed 41414. Increase in the number of complaints also reflects enhanced public trusted in the NAB. NAB during 2019, processed 1308 complaint verifications, 1686 inquiries and 609 investigations and recovered Rs 141.542 billion from corrupt elements in 2019. He said that NAB has introduced a new concept of Combine Investigation Team (CIT) in order to benefit from the experience and collective wisdom of senior supervisory officers, a system of CIT comprising of Director, Additional Director, Investigation Officer and a Senior Legal Counsel has been put in place. This is not only lending quality to the work. He said that NAB has established its state of the art Forensic Science Laboratory in NAB Rawalpindi. In 2019, 15747 questioned documents and 300 thumb impressions were analyzed in 50 cases and forensic analysis was carried out on 74 digital devices (Laptops, Mobile phones, Hard Disks etc). He said that NAB is the focal Organization of United Nations Convention against Corruption (UNCAC) which is pride for Pakistan due to NAB’s efforts. He said Pakistan is committed to United Nations Convention against Corruption (UNCAC) in eradicating corruption through its three pronged Anti-Corruption Strategy of Awareness, Prevention and Enforcement which has started yielding excellent results under the dynamic leadership of Honorable Mr. Justice Javed Iqbal, Chairman NAB.

He said that NAB had initiated a dialogue of the anti-corruption authorities of the SAARC countries with a proposal to set up a SAARC Anti-Corruption Forum. NAB hosted the first meeting of its kind in Islamabad where the heads of SAARC anti-corruption authorities including India agreed for creation of SAARC Anti-Corruption Forum and NAB is the chairman of SAARC Anti-Corruption Forum. This was a reorganization of NAB’s excellent work as NAB is considered as a role model among SAARC countries. He said that Pakistan’s Apex Anti-Corruption Agency, NAB is the only Organization in the world with whom China has signed a Memorandum of Understanding (MoU) to oversee projects to be undertaken under CEPC in Pakistan. He said that signing of Memorandum of Understanding (MOU) between Pakistan and China is especially significant in the backdrop of increasing economic and trade cooperation between Pakistan and China with the resolve by both the Governments to work in a fair, impartial and corruption free environment in order to share their experiences to eradicate corruption.