* Degrees of staff of all airlines, including pilots, engineers and ground staff, will be verified
* Faraz says 'minus one' formula a brainchild of opposition to cover up its corruption 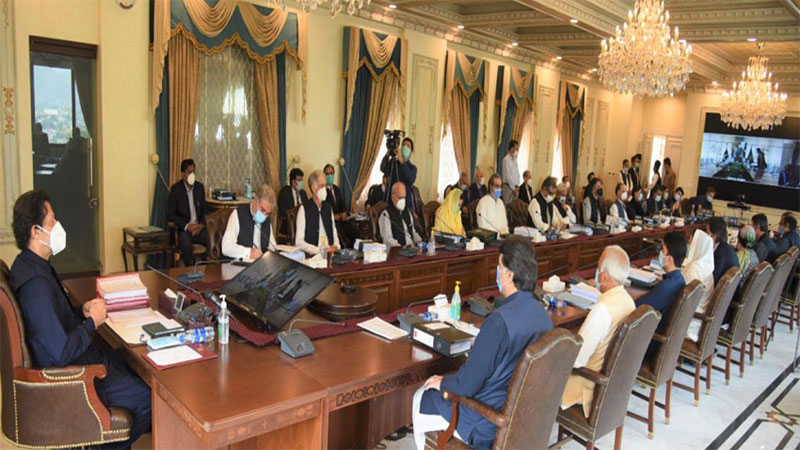 The federal cabinet was informed on Wednesday that the government has initiated reforms in the Civil Aviation Authority (CAA), including the process for issuing licenses to pilots, while all the airlines in the country have been directed to ensure transparency in procedures.

Briefing reporters about the decisions taken by the cabinet meeting chaired by Prime Minister Imran Khan, Minister for Information and Broadcasting Senator Shibli Faraz said the pilots now operating the planes of Pakistani airlines have 100 percent authentic degrees as all those with dubious credentials have been suspended. He said five employees of the CAA have also been suspended till the whole process of reforms is completed. It has been directed to take further action on fast-track basis, where the degrees of the staff of all airlines, including pilots, engineers and ground staff will be verified. He said the prime minister strongly believes in merit and transparency in all sectors.

The minister read out a statement for the media, which said, “On the instructions of the prime minister of Pakistan, the process of reforms has been initiated in the Civil Aviation Authority and all Pakistani airlines to ensure the sanctity of proper licensing and fulfilment of all requirements by the pilots. A thorough forensic review has identified various instances where licensing requirements were suspect, not fully adhering to the requirements of all examinations. To ensure highest safety requirements and meet professional criteria, all identified suspects have been grounded.”

“This grounding has been in effect since June 25, 2020. Due to certain instances of administrative lapses, five officials of Civil Aviation Authority have been placed under suspension and an inquiry has been initiated against them. This process of professional upgradation and overall reforms will continue in all Pakistani airlines and CAA. On this, the cabinet also instructed the CAA to pursue further actions in line with due process on a fast track basis,” the statement further read. “It expressed confidence in the overall capability and performance of the fully licensed and well experienced and professional pilots of Pakistani airlines. The government also asked the relevant government departments to work with international partners to facilitate travel and avoid any difficulty for passengers,” it added.

Senator Shibli Faraz said the cabinet deliberated on the report of the auditor general and expressed satisfaction that remarkable improvement had been made in procedures during the past 20 months. He said it accorded approval to three agreements of hydro power projects, including Kohala Power Project.

The cabinet, the minister said, also took into consideration the renewable energy options for power production, including solar and wind energy. The prime minister issued directives to remove hurdles and bottlenecks in the way of alternative sources to encourage cheap energy production. The cabinet also discussed sustainable development goals and on the suggestion of Minister for Information Technology Aminul Haq, the prime minister directed to reallocate development funds within a month before their lapse.

Shibli Faraz said the prime minister also directed to activate provincial finance commission in order for equitable development in all parts of provinces in an organized way and without any undue political influence. It would also help remove a sense of deprivation among the residents of backward areas in a province, he remarked.

He said after deliberations on the performance of Pak PWD, a committee under the leadership of Federal Minister of Economic Affairs Khusro Bakhtiar was constituted to look into public sector projects to be undertaken on reduced costs and improved quality. The committee would submit its report in 90 days. The minister said the cabinet discussed the potential of information technology exports and how to increase Pakistan’s share in the international market. The sector had the potential to increase exports to $ 5 billion dollars from the present $1 billion.

While discussing the issue of evacuee properties and their optimal use for income generation, it was decided that education and health related properties could be offered to private parties to not only generate their business but also provide facilities to the public.

Shibli Faraz said presently in the energy mix, some projects were producing one unit at the cost of Rs 34 which were needed to be replaced by the cheaper power generation ones to provide relief to the consumers.

The cabinet, he said, discussed the draft of Zaireen policy to regulate the visit to Iran, Iraq and Syria, and avoid unnecessary rush at Quetta and Taftan in certain seasons. After discussion it was deferred till the next meeting with the directives to remove the shortcomings and preparation of a legal fretwork.

Replying to questions of media persons, Shibli Faraz emphatically rejected the possibility of any minus-one formula, saying the Pakistan Tehreek-e-Insaf and its allies stand firm behind Prime Minister Imran Khan. He said the opposition leaders are spreading lies and disinformation to malign the prime minister, as they are not at ease with his presence at the office. At the time when Prime Minister Imran Khan is making effort to introduce a system of punishment and reward, the opposition parties, which ruined the state institutions, including the Pakistan International Airlines and the Pakistan Steel Mills, while in power, are trying to create uncertainty and confusion in the country. He said the PTI existed because of Imran Khan. It is a ridiculous act of the opposition parties, which had ruled the country for 20 to 30 years, were trying to hold the incumbent government accountable for its 20-month rule, he added.

He said both the Pakistan People’s Party and the Pakistan Muslim League-Nawaz stuffed their cronies in the state institutions for political gains in total disregard for merit and transparency. Referring to plundering of billions of rupees and the Surrey Palace, he said those who once rode on scooters now own such palaces.

To a question regarding the PIA pilots issue, the minister maintained the due course is being followed as well as the law so that such issues does not crop up again in future. The decisions in that this would be made strictly in line with the law, as those after having been charge-sheeted or suspended, have the option to approach courts.

Pakistan, he pointed out, was faced with a difficult situation, besides the spread of coronavirus, but the opposition has its own self-serving agenda, instead of cooperating with the government and coming up with proposals to deal with the deadly virus and how to improve the national economy. “If today, Imran Khan gives an NRO (National Reconciliation Ordinance) to seven or eight persons, he will be the best leader for them,” he added.

Referring to PPP Chairman Bilawal Bhutto Zardari, he said one cannot become a leader due to political inheritance and asked what political struggle he (Bilawal) had made while Imran Khan had made a struggle for the last 20 years and knew how the poor people lived and what were their issues. Bilawal’s father (Asif Zardari), he said, first hid behind presidential immunity and then behind the Covid-19 to save himself from accountability for his corruption. He said Prime Minister Imran Khan is totally different from the PPP and PML-N leadership as he has no business or corporate interests.