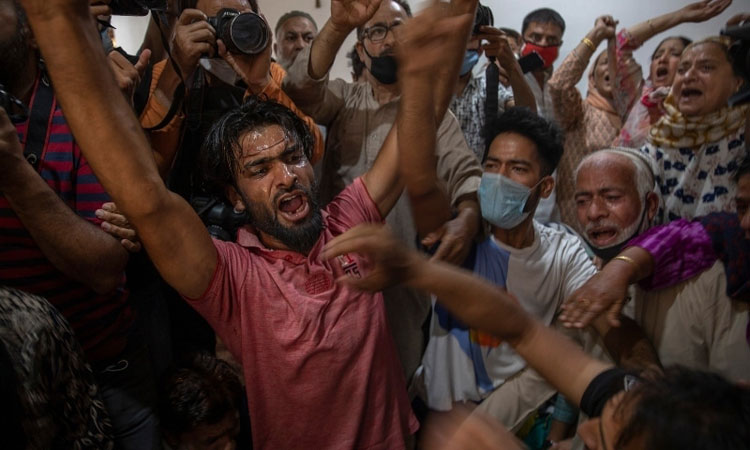 Thousands of people in occupied valley of Kashmir staged protests on Wednesday, accusing government forces of killing an elderly man in front of his minor grandson.

The family of Bashir Ahmed Khan alleged that he was dragged out of his car and shot dead by paramilitary troopers. His three-year-old grandson, who was travelling with him, was later pictured sitting on his chest. “Locals said that he [Khan] was brought out of his car and shot dead by the forces,” Farooq Ahmed, a nephew of the deceased man said. “They told us that someone in uniform then put the child on his chest as he lay dead on the road and took photographs,” Farooq Ahmed said.

The photo of the child sat on the body of his dead grandfather was widely shared on social media. Hundreds assembled at the man’s funeral near the main city of Srinagar shouting, “We want freedom”.

Reacting to the incident, Amnesty India said that officials had violated the law by disclosing the identity of the minor. “It is also a breach of the ‘best interests of the child’ principle as required to be the basis of any action by authorities under the Convention on the Rights of the Child, to which India is a state party.”

Leader of the Opposition in the National Assembly Shehbaz Sharif also condemned the killing. In a tweet, he said, “Widespread human rights abuses by fascist Modi govt constitute an acid test for the international community.”

Tweeting the picture of the deceased’s grandson sitting on his chest, Foreign Office Spokesperson Aisha Farooqui said she was “searching for words to describe […] the grief & helplessness of the Kashmiri people.”

In occupied Kashmir, Indian troops in their fresh acts of state terrorism martyred two more Kashmiris in Sopore town and Rajouri district on Wednesday. These killings raised the number of martyred youth to seven since Monday. The troops martyred another youth in a fake encounter during a military operation near Keri area of Rajouri district. The troops had killed five youth during violent military operations in Waghama and Runipora areas of Islamabad district in the last two days.

Indian Charge d’Affaires Gaurav Ahluwalia on Monday was summoned to the Ministry of Foreign Affairs to register Pakistan’s strong protest over the ceasefire violations by the Indian occupation forces along the Line of Control (LoC) on June 29, 30, resulting in martyrdom of one and serious injuries to five innocent civilians. “Condemning the deplorable targeting of innocent civilians by the Indian occupation forces, it was underscored that such senseless acts are in clear violation of the 2003 Ceasefire Understanding, and are also against all established humanitarian norms and professional military conduct,” the Foreign Office spokesperson in a press release said.