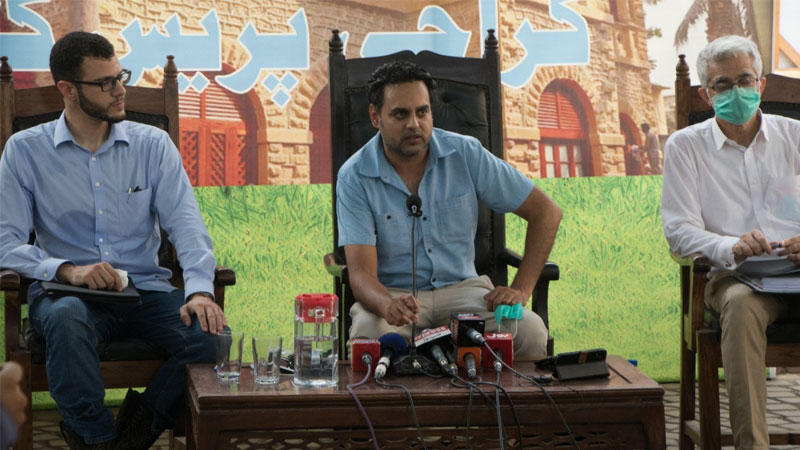 The affected families of PIA Flight #8303 that crashed with 97 passengers onboard on the 22nd of May 2020 outrightly REJECT the preliminary ‘Air Crash’ report and demand a comprehensive air crash investigation be carried out by an Independent International company of repute which does not have any political linkages or any previous association with the PIA, PCAA/CAA or PALPA or any serving or retired Airforce/Armed forces Personnel under the direct supervision of Supreme Court Judges.

An American citizen, Abdul Fatah Ilahi was also aboard the PIA flight #8303 and was wrongly identified by the SFDL (ICCBS) Dental Forensics Results issued by Dr. HumayonTeymour and buried 2 weeks before his son YaseenIlahi reached Pakistan. His father was identified with the help of the Punjab Forensic Science Agency (PFSA) as he had found out that SFDL was handing over WRONG bodies.

At a press conference held at Karachi Press Club, YaseenIllahi expressed his dismay at the whole process and asked to punish all those who were responsible for this accident

Arif Iqbal Faruqi, highlighted that SFDL is not issuing forensic reports on the fear that their criminal activities will be exposed. He further said “This is the best chance the government will get to DO DAMAGE CONTROL FOR PAKISTAN’S IMAGE and revamp PIA once and for all without the financial bleed since flights have already been restricted due to Corona.”

Pilot error has been established but this does not rule out any other technical/software/ hardware faults that may have been present in the aircraft and which can only be ascertained after the detailed report comes in.A number of SOP’s were broken by the Pilots and a series of mistakes committed that lead to the disaster. Mistakes that could only be committed by untrained or psychologically unfit Pilots and ATC personnel who had no idea how to handle an emergency situation or even have the basic knowledge to adhere to international safety and flight protocols.

The Pilot grossly violated altitude, speed protocols, the sterile cockpit rule (No personal conversation whatsoever during the final approach for landing) and disregarded ATC instructions as well. There was a total mis-coordination between the Pilot and the ATR staff. The Ground Staff including the ATR and CAA also violated multiple SOP’s including the visual verification of the landing gear and absolutely no preparations were made for an emergency landing as dictated by the emergency response protocols even though the aircraft was in the air for 17 minutes AFTER scraping the runway as the pilot continued on his Joyride.

The government and PIA are trying to put the entire blame on the Pilot and ATC personnel but the question that arises is WHO CLEARED THEM, TRAINED THEM,CERTIFIED THEM and HIRED THEM!? The Pilot Sajjad Gul was also declared unfit by PIA (1989) due to psychiatric issues but PIA was instructed by the WafaqiMohtasib& Sindh high Court to enroll him in (1994).

The CAA, PALPA and ASF are also part and parcel of the rampant corruption at the highest levels which has previously seen PIA being used to transport drugs and hard currency etc. which cannot be possible unless all the stake-holders are involved. ICAO regulations state that there be a 15 KM sterile zone with building height restrictions around every airport YET 3 storied buildings have been built with the collusion of CAA with the Sindh Building Authority in Karachi.

Previous political parties have systematically destroyed PIA and are now acting dumb!! The reality is that the whole system is corrupt and needs massive overhaul. As the issue is in the limelight, this is the perfect time for the government to take action against the rampant corruption once and for all and protect Pakistan from further disgrace and embarrassment

The affected families demanded “immediate registration of ‘murder cases’ against all the staff involved in the #8303 airplane crash; cease & desist order for all PIA flights international/domestic for 6 months (to be announced to the world), proceed with a strict investigation of PIA, CAA and PCAA, Identify all political appointees, who approved them within the PIA management. The politicians upon whose instructions, unqualified and fake degree holders were inducted and finally register ‘intent to murder’ cases against all guilty parties”.

They also demanded immediate blacklisting and breaking up all unions within the PIA along with the dissolution of the CAA, PCAA, PALPA and all others.

They called for investigating and then firing of all illegal hirings without benefits, and registration of criminal cases against them, their handlers as well as the politicians that made the forced appointments.