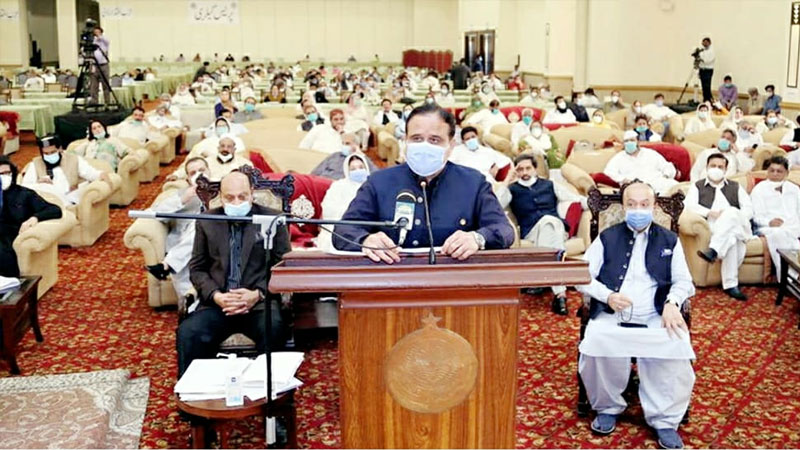 Punjab Chief Minister Sardar Usman Buzdar has said the PTI-led government has fulfilled the promise of the Southern Punjab Secretariat made with the people of southern Punjab.

Addressing the Punjab assembly session after the approval of provincial budget 2020-21, the CM paid tributes to Speaker Punjab assembly, Deputy Speaker and others who took an active part in the budget session. Besides the onslaught of coronavirus, the chief minister said the possibility of floods and another locusts attack are also anticipated. At the outset of the coronavirus, the Punjab government constituted a cabinet committee for corona control and imposed a corona emergency. Then, the testing capacity was 100 only but today, this capacity has reached to 12000 daily with the number of government testing labs reaching to 17. More than 5 lakh are tested in Punjab and there is no shortage of medicines for coronavirus, he added. Along with it, there are 9276 oxygen beds, 2600 high dependency units and 2302 ventilators. The government announced additional pay for doctors, health professionals, rescue staff and frontline staff engaged in the treatment of corona patients. The Shaheed Package was also announced for those laying their lives during corona duties, he said.

The CM said that 24 districts have been affected by locust attack but the damages were controlled to a large extent due to the timely steps. He said that one billion rupees were issued to PDMA and pesticides were sprayed at eight lakh acres to destroy locust swarms. He added that corona related App, information system and locusts surveillance-board have been launched by the government. I have also visited more than 25 districts to take stock of the field situation, he added. Punjab has also distributed 165 billion rupees among the needy under Ehsaas Programme. The corona has emerged as a big trial and Punjab got 635 billion rupees less revenue but I directed the finance team to present real figures instead of playing with the jugglery of the words. This budget is based on genuine data and figures, he asserted. Punjab needs 1300 billion rupees to complete ongoing development projects and it is difficult to arrange such a large amount in the prevailing circumstance, he maintained and assured that despite the difficult situation, the government will complete these development projects. He said that 106 billion rupees have been earmarked for safety from the corona. This includes tax relief worth 56 billion rupees and direct expenditures to the tune of 50 billion rupees. An incentive package has also been introduced for the construction industry to arrange employment opportunities for the poor labourers, he said. Meanwhile, small taxes worth 600 million rupees have been abolished to create ease in businesses. Similarly, a public-private partnership authority has been set up to complete 13 big roads construction projects with an amount of 140 billion rupees including Lahore Ring Road Southern Loop-III project which will be completed with the cost of 11 billion rupees, he added. He said that 23 billion rupees will be spent on Punjab Cities Programme and another 20 billion rupees will be spent on 12 development projects to provide basic facilities in 16 small and medium cities of the province.

The CM maintained that 5 billion rupees increase has been made in the development budget despite a difficult situation and 10 per cent increase has also been made in the local government budget. Jalalpur Canal Project has been started with an amount of 32 billion and 70 crore rupees and another amount of 31 billion and 73 crores has been allocated for the promotion of the agriculture sector. The government has allocated 1.5 billion rupees for women empowerment and 6 per cent increase has been made in the minorities budge, he stated. Similarly, the CM said that health and education budgets are increased by 38 per cent and 18 per cent respectively. The government has retrieved state lands worth 135 billion rupees in a province-wide operation against encroachments, he said. He said that the Punjab government will establish a technical college in Kharan, a community centre in Tuftaan and a 100-bed hospital in Turbat Balochistan for which 1.25 billion rupees have been earmarked. He stated that 1.5 billion rupees are being given in the head of utility bills in court grant and approval for 10,000 recruitments has been given in police along with the purchase of 600 vehicles. He said that 45 new police stations have also been set up in the province and land has been approved for the constructions of 101 police station buildings. The scope of rescue 1122 is being extended to all the tehsils and the scope of motorbike ambulance service will also be extended to every district, he added. The government has approved service structure and allowances for rescue 1122 employees after 15 years and the scope of model bazaars is being extended to tehsil level to overcome price-hike. He said that the Sehat Insaf Card scheme has been launched for 3.5 crore people in the province which is a record and 9.5 billion rupees are allocated to provide loans to the needy youth. The supplementary grants worth 61 billion rupees put forth by the cabinet committee have been rejected under austerity policy and a 37 per cent decrease has been made the expenditures of CM Office. He added the PTI government has recruited 12000 doctors and health professionals besides up-gradation of emergency and other facilities in 15 THQ hospitals.

Similarly, construction work on 12 new hospitals has been initiated and added that attaining real progress is not possible without getting education. CM emphasized that Punjab government is focusing its special attention on education sector and bills with regard to establishing universities across Punjab have been approved. He pledged that PTI government will definitely set up one university campus in every district. CM disclosed that 1227 primary schools have been given the status of elementary schools by upgrading them with zero impact meaning thereby without spending a single penny from the national exchequer. Usman Buzdar vowed that during the next phase, middle schools will be upgraded to high schools and likewise high schools will be upgraded to higher secondary schools.

He disclosed that we are bringing reforms in Board of Revenue and Land Record System is also being made proactive. He informed that Numberdari system along with lease system are also being restored. He apprised that Community Development Programme, Punjab Municipal Services Programme and Construction/Repair Work Programme will also continue in the next fiscal year budget.