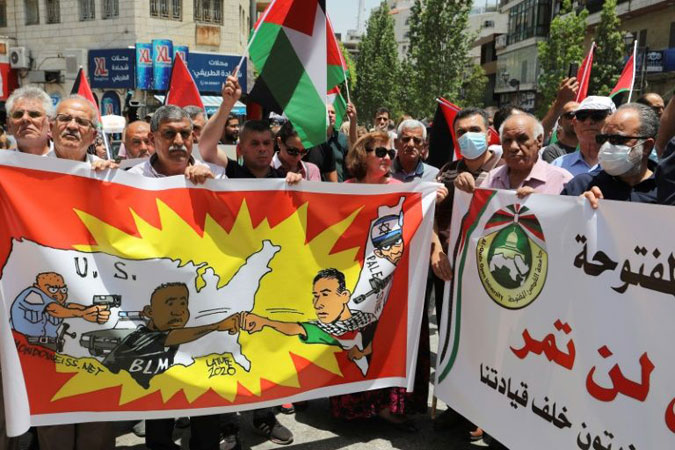 With loudspeakers mounted, Palestinian flags unfurled and civil servants allowed off work, everything appeared set for a large protest in Ramallah against Israel’s annexation plans in the occupied West Bank.

But only 200 people turned up for the June 8 demonstration, in a sign of the struggles the Palestinian Authority (PA) has faced generating outrage on the street against the prospective Israeli moves.

International condemnation of possible Israeli annexations has mounted ahead of July 1, when the Jewish state could take its first steps toward implementing part of a US-proposed Middle East peace plan.

President Donald Trump’s proposals, rejected outright by the Palestinians, pave the way for annexing key parts of the West Bank, including settlements long considered illegal by the majority of the international community.

But on Palestinian streets, mobilisation against looming Israeli actions has been muted.

“Fatigue from the usual — to stand in Ramallah and wait for the cameras to show how angry we are,” she added.

“You’re talking to yourself, and then what?”

There was a substantially larger rally in the West Bank city of Jericho on Monday, where crowds sang in unison and hoisted banners declaring “Palestine is not for sale,” in condemnation of the Trump plan.

The crowd of several thousand was brought to the protest site on buses chartered by the event organisers — the Palestine Liberation Organization and Fatah party — but many left even before the speeches began.

Odeh said the malaise was driven in part by frustration with Palestinian leaders who “promised to deliver peace through negotiation, (but) they failed.”

Israel has occupied the West Bank since the 1967 Six Day War.

The 1993 Oslo peace accords were designed to end the Israeli-Palestinian conflict and establish the scope of Palestinian autonomy in the West Bank.

But nearly three decades on, doubts have grown among some Palestinians about their leaders’ ability to secure a deal with Israel that would be accepted on the Palestinian streets.

“The PA is so weak! It has no power,” said a farmer who requested anonymity in the Jordan Valley, a strategically crucial West Bank area targeted for annexation in the Trump plan.

For Ghassan Khatib, an academic and former PA official, signs of apathy about the prospect of annexation reveal a widening “gap” between the Palestinian people and their leaders.

Khatib blames this gap in part on “the absence of elections,” last held in 2006 and on a disconnect between an ageing Palestinian leadership and a young population.

The 2006 election came a year before Islamist group Hamas took power in the Gaza strip. Palestinian president Mahmud Abbas, whose Fatah party is Hamas’s rival, has previously pledged to hold elections on multiple occasions but without following through.

A poll published this week by the Jerusalem Media and Communications Centre (JMCC) and the German Friedrich-Ebert-Stiftung foundation, found that 83 percent of Palestinians believe it is important to hold an election.

Asked “who do you trust most?”, only 13 percent of respondents answered Abbas, who is 85 years old, while 76 percent described the PA he leads as corrupt.

‘The street will lead’

Khatib noted that the annexation threat comes as Palestinians face worsening economic conditions brought on by the coronavirus pandemic, along with a new surge in West Bank infections.

“People have too many problems over their heads in this period” to mobilise properly, according to Khatib.

He added that some among the Palestinian public see annexation as a continuation of Israel’s long-running campaign of “consolidating occupation,” including the regular construction of new Jewish settlements.