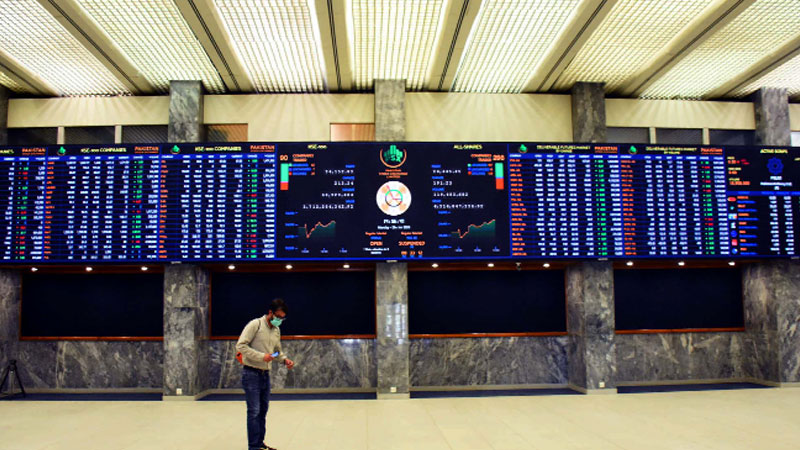 Investors faced a unique crisis on the first trading session of the week when Terrorists stormed Pakistan Stock Exchange premises in Karachi and injured several civilians before being taken down by the security forces during the initial hours of the session. After the operation concluded, bullish trend returned to the bourse, and triumphed over terror as benchmark kse-100 index gained 243 points to cross 34,000 mark and closed 0.71% higher at 34,181.80 points.

Investors brushed off terror, and picked up from the positive closing of Friday’s session. Investors continue to push rally over State bank of Pakistan’s announcement to cut interest rate by 100 basis points to 7%. Meanwhile, on political front, sentiments were further lifted after National Assembly of Pakistan approved Rs7,294.9 billion federal budget for the fiscal year 2020-2021 on Monday, despite the opposition’s vow to not let it sail through the House. The passage of bill marks the end of political deadlock in Islamabad, giving a sigh of relief to the investors.

While, the sectors that continue to weigh down the index were Power Generation & Distribution with 14 points, Fertilizer with 10 points and Insurance with 6 points and Automobile Parts & Accessories with 2 points.

Global Markets: Global stock markets continue to show mix trend as investors tread cautiously over resurgence of covid-19. Investor sentiments continue to dampen as hopes of economic recovery recedes over fears that virus resurgence may trigger another covid-19 lockdown. Amid virus surge, hardest hit US states have delayed further reopening of their economies.

In U.S , Investors bet on select stocks on hopes most state economies will continue to reopen even as some hotspots pop up. Wall street shrugged off the virus scare and recorded gains in a volatile trade. The Dow Jones Industrial Average traded 468 points higher, or 1.8%. The S&P 500 was up 1.2% while the tech heavy Nasdaq Composite gained 1%. Benchmark Dow was mainly lifted after Boeing rose 7.7% as certification flights for the Boeing 737 Max were set to begin Monday. The test is seen by investors as a critical step in Boeing’s worst-ever corporate crisis, which began in March 2019 after two crashes in five months killed 346 people. While, Southwest Airlines stocks also appreciated after Goldman Sachs upgraded the shares to buy from sell. Southwest gained 5.1% following the upgrade. Shares of retailer Gap and Kohl’s also rose 4% and 5%, respectively.

In Europe, stocks also gained ground with major benchmarks ending in a positive territory. German DAX led the gains and closed 1.18% higher, while U.K’s FTSE-100 edged higher by 1.08%. CAC-40 in Paris closed higher by 0.73%. Sentiments improved in the region primarily after pharmaceutical Gilead Sciences announced the pricing plan for its coronavirus treatment candidate remdesivir. The drug will cost $3,120 for a typical U.S. patient with commercial insurance. The company intends to begin charging for the drug in July. Investors also welcomed fresh Euro data which revealed that euro zone economic sentiment improved in June. According to the data by European Commission, economic sentiment in the economic bloc jumped to 75.7 from May’s 67.5.

However, In Asia, Stocks slumped as under pressure investors continues to lose hope over rising worsening 19 situation. In Japan, the benchmark index Nikkei 225 lost 2.3% on the day to 21,995.04 as shares of index heavyweight Fast Retailing and conglomerate Softbank Group dropped more than 2% each. While, in South Korea’s Kospi index lost 1.93% to close at 2,093.48.Hong Kong’s Hang Seng index also recorded losses and dropped 1.01%, as of its final hour of trading, with shares of life insurer AIA down 3.1%. In China, Shanghai composite declined by 0.61% to about 2,961.52.