KARACHI: At least six people were killed when gunmen attacked the Pakistan Stock Exchange in Karachi on Monday, with a policeman among the dead after the assailants opened fire and hurled a grenade at the trading floor, police said.

Four security guards, a policeman and a bystander were killed in the ensuing melee, according to a statement from the Karachi police.

“Police have recovered modern automatic weapons and explosive materials from the terrorists,” the statement said.
The gunmen attacked the building, which is in a high security zone that also houses the head offices of many private banks, with grenades and guns, said Ghulam Nabi Memon, chief of police in Pakistan’s biggest city and its financial hub.

“Four attackers have been killed, they had come in a silver Corolla car,” Memon told Reuters. 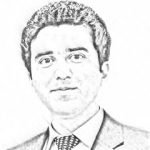