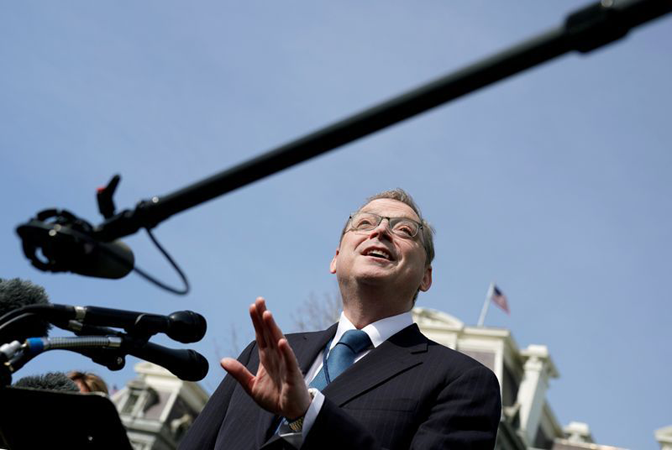 A top White House economic adviser on Friday predicted an “increasing divergence” between states controlled by Republican governors and those led by Democrats, saying Republican “red” states opening up faster will see a stronger economic recovery.

President Donald Trump has claimed repeatedly without evidence that Democratic-led “blue” states have not reopened more quickly amid the coronavirus pandemic in order to hurt his re-election bid in November.

The Republican president has been pushing to reopen the crippled economy as the country works to recover from a virus that has so far killed more than 113,000 people in the United States, by far the most in the world.

“The thing that as an economist gives me pause as I look forward is that there’s a radical difference right now in the data between red states and blue states,” senior White House adviser Kevin Hassett told Fox News Channel.

Hassett pointed to Vermont, which he described as a blue state that elected a socialist US senator – a reference to US Senator Bernie Sanders – as a state with a low number of coronavirus cases per capita whose economy remains basically closed.

“Other states are wide open,” he said. “So I think that there is going to be increasing divergence between the economies of blue states, where unemployment is going to be staying very, very high and the economies are going to stay closed, and the red states that are mostly open,” Hassett said.

About half a dozen states, including Republican-led Texas and Arizona, are grappling with a rising number of coronavirus patients filling hospital beds, fanning concerns that the reopening of the US economy may spark a second wave of infections.

Hassett said national trends continue to head down, but there are some flare-ups and “the battle is not over.”