In August 1947 India was partitioned with a huge blood-shed resulting in massive migration between India and Pakistan. Since then, this triggered aggression and hatred developed equally among both the nations. During Partition, around four million people were estimated missing and around two million as displaced. Only in Punjab 500,000 to 800,000 were killed during their migration from India to West Punjab. The chief culprit of this holocaust was the leaderships of the indulged communities for they invoked religious sentiments to earn blind support of respective communities. Indian partition based on the Muslim and non-Muslim majority areas. Even after Partition, politicians of both countries are still in need of the religious elites’ assemblages to keep their regimes intact. Steadily, religion appeared as the pivotal part of both evolving societies and this practice paved a smooth path for the religious fundamentalists licensing them to manipulate the masses in the very name of religion through interpretations of the scripture subjective to the wishes of the religious lords.

Historically, Indian and Pakistani social order haven’t been reflecting a balanced version of positive social development. Before Partition, the leaderships of the Indian National Congress (INC), the All India Muslim League (AIML) and the Shirimoni Akiali Dal (SAD) were involved to provoke the sentiments of relevant communities to get the maximum and best out of geographical amount of India in 1947, but intuitively they were diffusing the hate among the Indians. When this hate materialized and got out of control, the leaderships started to appeal for peace and harmony to the people. Leaders, including the British administration, used press, cinemas, radio and leaflets to contain the violence but failed because now it has not remained easy to overturn the deep-rooted hatred of decades. On the other hand political leaders did not agree to shake-hands for socio-political reconciliation at any cost. In fact this hate, rivalry, violence and communal extremism became the immediate reasons of the Partition of India and Punjab in August 1947.

In Pakistan, minorities are also considered as second class citizens

After 73 years, in case of India, ‘Under the majority rule’, contemporary Indian political rulers are again trying to decode the same version of exploitation of minorities and tiny groups. The Ram Mandir issue and the verdict of Indian Supreme Court are not entirely Hindu but pro-BJP. The emergence of the issue and its judicial decision reflects the extremist ideology of BJP leadership. In fact there are three contenders of the 2.77 acers of Babri Mosque/Ram Mandir; Muslims, Hindus and a Hindu sect Nirmohi Akhara. After Partition, in 1949 first time Ram’s worship started in Babri Masjid by extremist Hindus, steadily, the movement became strong when in 1980s LK Advani started to lead this movement. In 1992 the historical riots for Ram Mandar started in Ayudhya causing the death of more than 2000 people. In 2010 Allahabad high Court issued the historical verdict to divide the Babri Masjid’s land between Muslims, VHP and Nirmohis equally, but later the Indian Supreme Court suspended this verdict and finally in November 2019 issued a new verdict in the favour of Hindus, not to mention in the reign of the BJP. 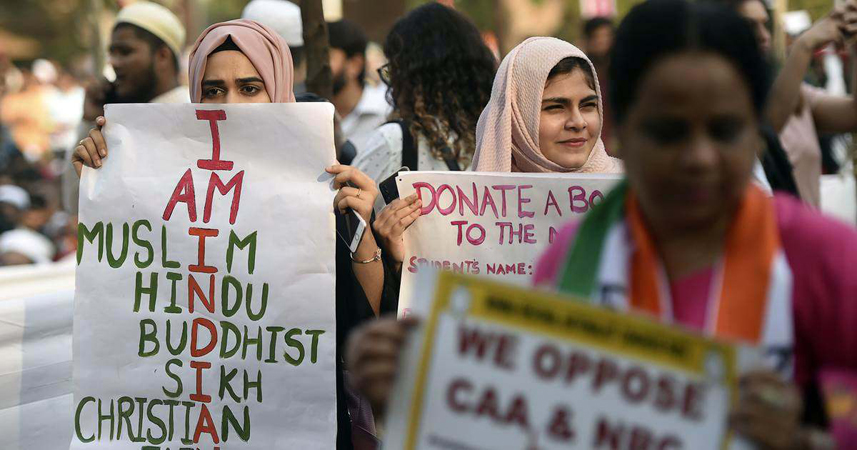 Overall in India, Muslims are the largest minority with more than 180 million of population suffering extensively. But the State has failed to provide security to the minorities, particularly the Muslims, which is no doubt supportive for the extremist Hindu entities. Furthermore, according to the Human Rights Watch (2014), regarding Hindu-Muslim tension only in 2013, 133 people died and 2,000 injured in violence being 30% violence increase as compared to the previous year. To the US religious intolerance report of June 2019, India responded it as India’s internal issue, whereas after signing the International Human Rights Declaration it does not remain an internal issue of a country.

In the early 1950s, the religious stratum perpetually overcame the local society. Street power of the religious clerics started to monopolize their religious hegemony in the name of Islam. After the creation of Pakistan, defeated religious bands like Jamaat-i-Islami, Ihrar, JUI etc started to mislead the natives to dig their social, political and religious space in the Pakistani society. In this regard, they first punched in 1953 in the name of Khatm-i-Nabuwat and Ahmadis were their first target. Political forces obliged the religious stratums to get the electoral benefits. Most of the religious parties and bands have political backs so this is almost impossible to contain their aggressive and monopolized behaviour.

Bhutto’s and Zia’s so-called policies of ‘Islamization’ damaged the true face of a balanced Pakistani identity. Even Pervez Musharraf’s operation against Lal Masjid in Islamabad created more abhorrence among the certain religious bands and gained enough sympathy that let Mullah Abdul Aziz and his institutions resume in full capacity.

The orthodox behaviour of religious stratums, militant bands and state supported laws are big threat for the non-Muslims and tiny groups in Pakistan. The misuse of blasphemy laws is another kind of ‘official terrorism’ against the minorities, while not even a single non-Muslim has been found involved in any anti-state activity since 1947. The extremist society is eternally equipped to punish and take the law into hands even on unauthentic blame of blasphemy particularly in case of non-Muslims. This is producing uncertainty and sense of insecurity among the non-Muslim population of Pakistan.

The Constitution of Pakistan does not provide right to serve as the premier or president of Pakistan to any non-Muslim. By birth Pakistan is not an Islamic state but only a state of Muslim majority because in 1947 India was divided on the basis of Muslim non-Muslim majority areas. The constitution has failed to prove how a non-Muslim PM or president can hurt the emotions, laws or hegemony of the majority Muslim population. Furthermore, this is an open violation of the equal rights of the citizens under the constitution of 1973, human rights charter of 1948 and International Covenant on Economic, Social and Cultural Rights (ICESCR) charter of the UN implemented in 1976.

Moreover, CIFORB, University of Birmingham’s study of 2018 projects the same situation in Pakistan with the Hindu and Christian girls. “Minorities often do not receive the protection required from state institutions and lack of access to justice”. On the other hand, between 2010 and 2015, more than 1,200 Hindus migrated to India because of religious, economic and social discrimination in Pakistan. According to BBC reports, between 2010 and 2015, Indian resources granted Indian nationality to 1,400 Pakistanis, most of them were Hindus. Christians are 1.7% of Pakistan’s population. Commonly they are the soft target for the blasphemy laws manipulation; the cases of Asia Bibi and Rimsha Masih are the worst examples. In 2005, in Faisalabad an aggressive mob burnt many Christians’ houses in 2009; in Gojra more than 40 houses of Christians were burnt. Moreover, in a terrorist attack in 2017 about 9 were killed and 57 wounded, in 2016, on Easter Day celebration a Church in Lahore was attacked killing 70 Christians and injuring 340.

The endless Ahmdiyya persecution in Pakistan only corners the Ahmadis while they ever remain loyal and sincere with the state of Pakistan. According to the reports, after the promulgation of Anti-Ahmadiyya Ordinance, 765 Ahmadis have been booked for displaying kalmia, 38 for calling Azan, 447 for posing as Muslims, 161 for using Islamic epithets, 93 for offering prayers, and 825 for preaching.

Regrettably, the government has entirely failed to implement the articles 2, 6, 7.B, 13.1, 15 and 18 of the ICESCR in reference of minorities and tiny groups. The non-Muslims and tiny groups possess equal worth, abilities and potentials to serve the nation as the majority population, however social, religious and political discrimination have eventually begotten a hateful mindset in both India and Pakistan. If the extremist Hindus do something against the minority Muslim population in India, in response the Muslim majority population is ever ready to hit the Hindus and their worship places in Pakistan. Bomb blasts in the churches, Ahmadiyya worship places and demolition of Hindu temples are its worst examples. The forced marriages kidnapping of Hindu girls particularly in Sindh is a common practice, why only Hindu girls are accepting Islam? Why not the Hindu boys? This situation is worst and against the article 16 of the Convention on the Elimination of all Forms of Discrimination Against Women, , a UN charter of 1979.