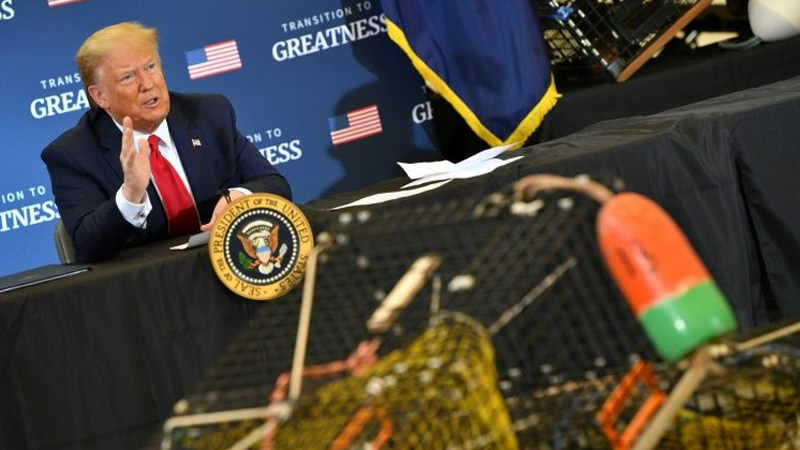 President Donald Trump threatened Friday to impose tariffs against the European Union and China in retaliation for duties imposed on imports of US lobster. At a meeting with fisheries representatives in Bangor, Maine, Trump instructed his hawkish trade advisor Peter Navarro to look into punitive tariffs on EU cars and on unspecified Chinese products.

The Republican leader told lobster industry representatives that the EU has to drop its tariffs “immediately.” “If they don’t change, we’re going to put a tariff on their cars and they’ll change right away,” he said, calling Brussels “almost as bad over the years as China in terms of trade.” He said the tariff would be “equivalent-plus.”

Trump also told Navarro to look at China and find “something they sell that’s very precious to them” which could then be counter-tariffed. “Pick a product, a corresponding-plus if they don’t drop the tariff for Maine lobster going into China.”

“It’s very simple,” he said. “All you do is say, that’s OK, keep charging us: we’re going to charge you a corresponding.”

“Peter Navarro is going to be the lobster king now,” he joked. At the same meeting, Trump signed an order instantly removing fishing restrictions imposed under president Barack Obama on 5,000 square miles (12,949 square km) of ocean off the coast of Maine.

The northeastern state is a small but important part of the mosaic of electoral college votes that Trump hopes to construct to secure a second term against Democratic challenger Joe Biden. He narrowly lost the state in 2016.