On May 25 this year, during a racial demonstration in Minneapolis, in Minnesota state, a sordid incident took place which shook the entire America, when in the wake of a protest rally, a black American was mercilessly killed in police custody. In the ensuing days it sent a wave of violence as a result of which curfew was clamped in 25 major cities of US. The incident of the death of the black American went viral when a disturbing cellphone video later posted to Facebook showed an officer pinning Floyd to the ground with his knee on Floyd’s neck while a handcuffed Floyd kept crying for seven minutes, “I can’t breathe.” Thus he was suffocated to death. The words “I can’t breathe” became a national chorus in the days following the death of George Floyd. 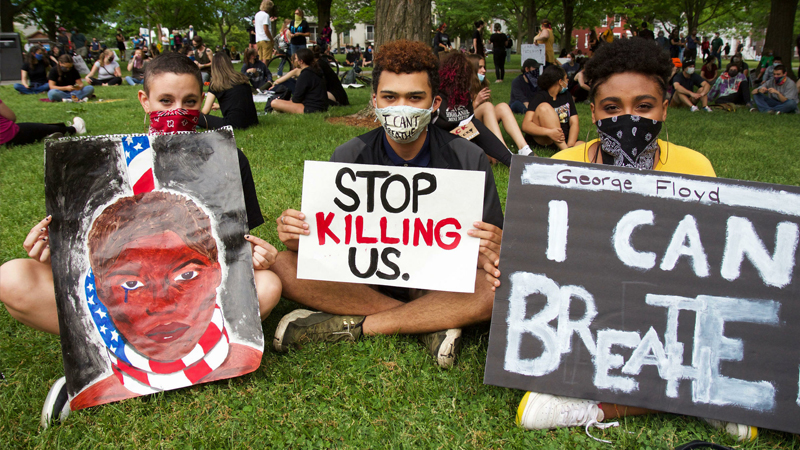 Derek Chauvin, the officer seen in the video kneeling on Floyd’s neck, has been arrested and charged with third-degree murder and second-degree manslaughter in Floyd’s death. The charges carry a maximum of 35 years in prison combined. Floyd’s family calls for first-degree murder charges, and that the remaining three officers be arrested and charged.

Racial discrimination in the US has existed since the colonial era, when white Americans were given legally or socially sanctioned privileges and rights while these same rights were denied to other races and minorities. European-Americans, particularly affluent white Anglo-Saxon Protestants, enjoyed exclusive privileges in matters of education, immigration, voting rights and citizenship etc. Non-Protestant immigrants from Europe often suffered xenophobic exclusion and other forms of ethnicity-based discrimination in American society until the late 19th and early 20th centuries.

Some Americans saw the presidential candidacy of Barack Obama, who served as president of the United States from 2009 to 2017 and was the nation’s first black president, as a sign that the nation had entered a new, post-racial era. The election of President Donald Trump in 2016 has been viewed by some commentators as a racist backlash against the election of Barack Obama, calling it a “white lash”. Since the mid-2010s, the Department of Homeland Security and the Federal Bureau of Investigation have considered white supremacist violence to be the leading threat of domestic terrorism in the United States.

Black Indians have been defined as Native American people, having a significant African American heritage. European colonists created a new demand market for captives of raids when they created the Thirteen Colonies. Native Americans began selling war captives to whites rather than integrating them into their own societies. The enslavement of Africans and Native Americans was considered as a moral, legal, and socially acceptable institution. ; a rationale for enslavement was “just war” taking captives and using slavery as an alternative to a death sentence.

In this background, and especially due to lack of facilities for growth which the colonial settlers enjoyed, African Americans score lower than European Americans on vocabulary, reading, and math tests, as well as on tests that claim to measure scholastic aptitude and intelligence. This gap persists up to their adulthood.

Racial discrimination in the US has existed since the colonial era, when white Americans were given legally or socially sanctioned privileges and rights while these same rights were denied to other races and minorities

In 1865, during the Reconstruction period after the Civil War, the Thirteenth Amendment to the United States Constitution was passed and it abolished slavery. This was soon followed by the Fourteenth Amendment to the United States Constitution that granted citizenship to all persons “born or naturalized in the United States”, and the Fifteenth Amendment to the United States Constitution that protected the rights to vote for everyone. These Amendments passed during the Reconstruction period extended protection to the newly emancipated slaves. However, in the 1870s Jim Crow laws were introduced in the Southeastern United States. These laws promoted the idea of “Separate but equal” which was first brought about from the Plessy v. Ferguson in 1896, meaning that all races were equal, but they had to have separate public facilities. The mixing of races was illegal in most places such as public schools, public transportation and restaurants. These laws increased discrimination and segregation in the United States. Furthermore, the Jim Crow laws systematically made life harder for African-Americans and people of color. It made voting harder to accomplish, due to the fact that African-Americans had to do literacy tests and go through other obstacles before getting the chance to vote.

The law of “separate but equal” was challenged in the Supreme court in which the Court ruled that denial of opportunity for an adequate education would often be a denial of the opportunity to succeed in life, that separation of the races in the schools solely on the basis of race must necessarily generate feelings of inferiority in the disfavored race adversely affecting education as well as other matters, and therefore that the Equal Protection Clause was violated by such separation. Thus in the field of public education the doctrine of ‘separate but equal’ was struck down by the Court. Separate educational facilities were declared as “inherently unequal.”

Major figures such as Martin Luther King Jr., Malcolm X, and Rosa Parks were involved in the fight against the race-based discrimination of the Civil Rights Movement. Rosa Parks’s refusal to give up her bus seat in 1955 sparked the Montgomery bus boycott, which continued for 381 days until the Supreme Court deemed that segregated seating is unconstitutional. Dr. Martin Luther King Jr., a peaceful activist and pastor, led many such protests, advocating for the improvement of African-Americans in American’s society. His role in the Montgomery Bus Boycott helped to launch his role in the Civil Rights Movement. King organized many protests attended not only by African-American, but also Caucasians.

While Dr Martin Luther King organized peaceful protests, Malcolm X advocated violent resistance. His ideas of Black Nationalism and the use of violence to fight back helped to spark the political group in the Black Panther Party for Self-Defense.

The American history is replete with racial violence, and all Presidents have in their times tried to mitigate this violence. As America mourns and burns, US President Donald Trump continues to fan the flames of hatred and division in the country. In his reign, he has gone more racist than any of his predecessors. He is using his menacing polarizing rhetoric and has called people protesting the police killing of African American George Floyd as “thugs” and warned that when “the looting starts the shooting starts.” By clarifying and justifying, he is muddying the water and letting the alligators loose. The move is clearly meant to present him as the protector of the white majority.