‘Hit me in front of square’: Shoaib Akhtar relives battle with Herschelle Gibbs 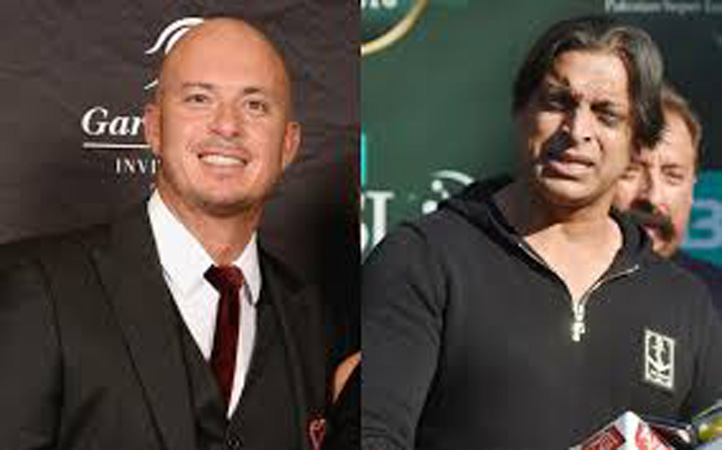 ISLAMABAD: There have been quite a few memorable battles over the years between batsmen and bowlers, and one such battle was between former South Africa opener Herschelle Gibbs and fast bowler Shoaib Akhtar. It was the sixth ODI of a tri-series in Sharjah, in March 2000 and Pakistan beat South Africa by 67 runs in a low-scoring encounter. Akhtar was the wrecker-in-chief as he returned with figures of 3-9 that helped Pakistan bundle out the opposition for 101. But Gibbs was the only batsman who remained unbeaten on 59 from 79 balls. What’s interesting is that Pakistan achieved the victory without dismissing both the opposition openers –– Gary Kirsten had retired hurt earlier in the innings. Gibbs tweeted this bit of info and remembered how Akhtar had done the damage that day. The latter had dismissed Mark Boucher, Dale Benkenstein and Lance Klusener in the 17th over of the innings, that led to their eventual downfall. Proteas were bundled out for a mere 101. Later Akhtar tweeted how he tried to get under Gibbs’ skin and asked him to hit ‘in front of the square’, but laughed that he ultimately ‘ran out of partners’. In an interview earlier, Former Pakistan fast bowler Mohammad Asif claimed that India legend Sachin Tendulkar closed his eyes while facing express pace bowling from Shoaib Akhtar.

The incident took place during the third Test of the 2006 series at Karachi, which Pakistan won despite Irfan Pathan claiming a hat-trick in the first innings. “When the match started, Irfan Pathan claimed a hat-trick in the first over itself. Our morale was down. Kamran Akmal scored a century lower down the order. We scored around 240 runs,” Asif said in the Burgerz show. “When we started bowling, Shoaib Akhtar bowled at express pace in that match. I was standing at square leg near the umpire and I myself saw that Tendulkar closed his eyes while facing one or two bouncers bowled by Shoaib.”