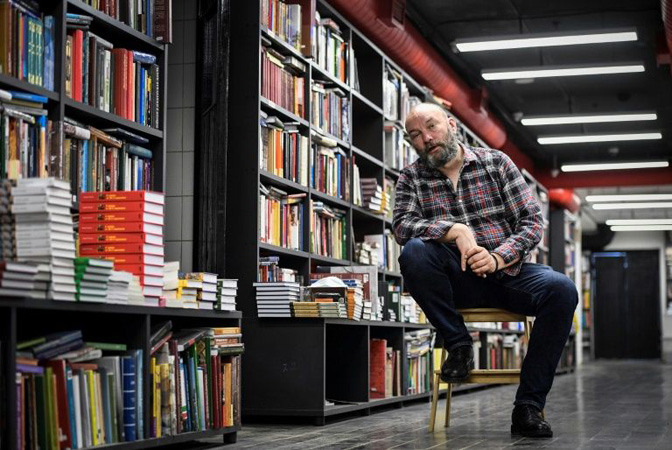 When Moscow authorities closed non-essential businesses to stop the spread of the coronavirus, Boris Kupriyanov began to personally deliver books to his customers.

This, he said, has helped him and his indie bookstore survive over the past two months. “In many ways this has become our salvation,” Kupriyanov, co-founder of Falanster, one of the country’s most famous independent bookshops, told AFP. “We’ve kept going only because people wanted to buy our books and help us,” he added. Many small and medium-sized businesses including Kupriyanov’s bookstore will be allowed to reopen on Monday as authorities gradually ease confinement restrictions in Russia, which has reported more than 396,000 coronavirus infections — the third-largest caseload after the United States and Brazil.

Not everyone will resume operations, however. According to a study by the Center for Strategic Research in April, about a third of Russian companies risk bankruptcy following a collapse in demand fuelled by the epidemic. Companies in the trade and services industries are among the hardest-hit, the think-tank said.

While authorities have unveiled measures to prop up the economy, including tax payment deferrals and interest-free loans, many small and medium-sized businesses complain they pale in comparison with measures extended to enterprises in the West.

Vladimir Gimpelson, head of the Centre for Labour Market Studies at Moscow’s Higher School of Economics, said tax breaks and loans were of little help for companies on the brink of bankruptcy.

“Deferrals are not a solution to the problem,” Gimpelson said in a recent report, warning of a rise in poverty and inequality. The Russian government has refused to tap into the country’s sovereign wealth fund, which had assets worth $150 billion as of early March, and instead ordered companies to continue paying their employees in April despite the shutdown.

“We have not felt any major support from the state,” said 47-year-old Kupriyanov, sporting a salt-and-pepper beard and a small silver ring in his left ear. “This has been an ordeal and unfortunately for many companies it has become fatal,” he added. The crisis has dealt a major blow to Falanster — a treasure trove of intellectual literature including small print-run books by little-known authors.

Before the coronavirus struck, business had flourished and the shop had just moved to bigger premises on Tverskaya Street in the heart of Moscow.

When operations ground to a halt in late March, staff launched a delivery service. Kupriyanov said he was grateful for the opportunity to stay in touch with his customers, and the new tasks also helped him take his mind off the current crisis. “When you make 10 to 15 to 20 deliveries a day you simply have no time to think about what’s happening,” he said.

Economists say that even though authorities have tried to prevent mass layoffs and bankruptcies, hundreds of thousands of people have found themselves without an income.

According to the Russian statistics service, unemployment increased to 5.8 percent in April from 4.7 percent the month before — hitting the highest level in four years.

Estimating the government’s total anti-crisis spending at $42 billion, The Bell, an independent Russian-language media startup, said that authorities could have “easily spent much more” but did not want to. “Putin and the government prefer caution because of a traumatic experience in the 2008 financial crisis when Russia burned through almost all its reserves,” it said this week.