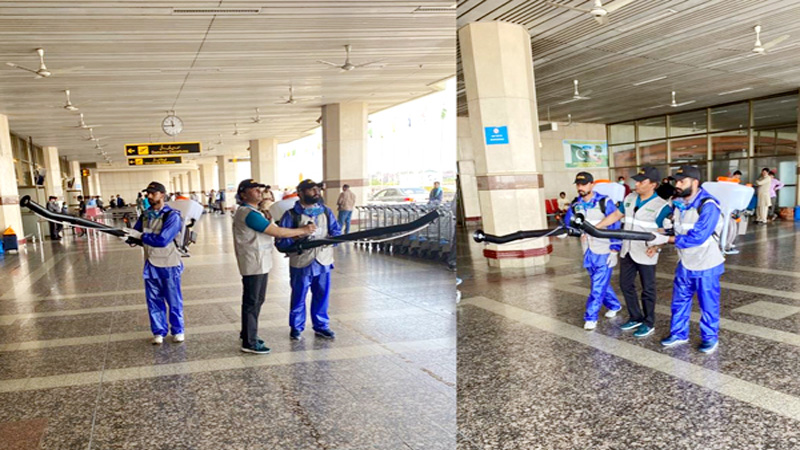 Pakistan has decided to allow international flights to resume, an aviation official said on Friday, after largely closing its airspace to commercial flights since March to curb the spread of the coronavirus pandemic.

“Both national and foreign airlines shall be allowed to operate from all international airports of Pakistan with exception of Gwadar and Turbat,” said Abdul Sattar Khokhar, Senior Joint Secretary at the Civil Aviation Authority in a statement, adding that flights would be allowed from Saturday (today).

“All national and foreign carriers are permitted to start scheduled/non-scheduled and charter operations for outbound passengers only, with effect from May 29, 2020, 1900 UTC [12am local time, Saturday] from all international airports except Gwadar and Turbat airports,” a CAA notice said.

It mentioned that foreign airlines would be able to take off from Pakistan’s airports with passengers. “The restrictions on inbound passenger operations into Pakistan shall continue. However, special permission is required from government of Pakistan by national foreign carriers and charter operators for flights with inbound passengers on case-to-case basis,” it said. “Additionally diplomatic, special, and cargo flights to/from Pakistan shall also be permitted. All airlines shall adhere to the standard operating procedures [SOPs] for international passenger and charter flights,” it added.

The notice emphasised that the crew of foreign planes landing at Pakistani airports will not be allowed to disembark.

Domestic flight operations had resumed in Pakistan from five major airports on May 16, as the country continued to gradually ease lockdown measures. A PIA spokesperson said the SOPs were strictly being observed to avoid the spread of the coronavirus. It has been made mandatory for the passengers to wear masks and use hand sanitisers, he said, adding, “The airline is operating flights as part of its national duty.”

The federal minister was speaking to a private TV channel, where he said that a total of 40 out of 142 passenger trains will become operational from the start of the next month. He said that the trains will follow the already-decided standard operating procedures for the course of their journey. He said that to facilitate the passengers, booking offices will remain open, besides the online booking option.

The federal minister showed gratitude towards Prime Minister Imran Khan for allowing 40 trains to operate. “Due to the closure of train service, the railways ministry was facing a loss of Rs 5 billion per month,” he said. The train services resumed operations partially from May 20 across the country.

The Ministry of Railways had issued the SOPs for passengers. According to the SOPs, only 60% passengers will fill a train, while 40% will remain empty. The passengers will wear masks and the railways officials will provide them with sanitisers during the journey. For a first-time violation of an SOP, there will be a fine of Rs 500 while for the second time, there will be a fine of Rs 1,000. A passenger will be off-loaded for a third-time violation. During the first phase of resumption of operations, 30 trains began their journey from the provinces.

The government of Sindh and Karachi’s traders and business community have mutually agreed upon running operations throughout the week. The Sindh government on Friday agreed to the demands of traders, businessmen and shop owners in Karachi allowing them to open markets from Monday to Sunday for a limited amount of time in a day. Shops could open from 8am till 5pm on Saturdays and Sundays as life continues to slowly return to normal in the country.

Provincial Minister for Information Nasir Hussain Shah confirmed the news saying that major shopping centres and malls will open according to standard operating procedures (SOPs) decided beforehand by the government.

Meanwhile, Prime Minister Imran Khan has called an important meeting of the National Coordination Committee (NCC) on May 31 to make decisions concerning the coronavirus lockdown. The prime minister will chair the session in which federal and chief ministers will participate along with other dignitaries. Military and National Disaster Management Authority (NDMA) officials will give briefings over the matter. The NCC will analyse the measures taken against the pandemic and make decision whether to further relax the lockdown or to tighten it with mutual consultation. The meeting will deliberate to further mobilise the train service and authenticate the decisions made by the National Command and Operations Centre (NCOC).