Who should decide the moon sighting?

The sighting of moon had been a matter of constant dispute over several years in the sub-continent due to which Eidul Fitr used to be celebrated in different parts on different dates. Sometime it resulted into armed clashes between various sects, which made the solemn occasion a matter of fear and anxiety endangering human lives and properties. In order therefore to have a consensus of various sects about the sighting of moon, and holding Eidul Fitr on one day, President Ayub Khan in the 60s formed a Ruet-e-Hilal Committee to decide the issue of sighting of the moon a little after sunset on 29th of Ramazan. But this experiment too became controversial because the decisions sometimes were announced as late as midnight. Hence the working of this committee became suspect and un-trustworthy. 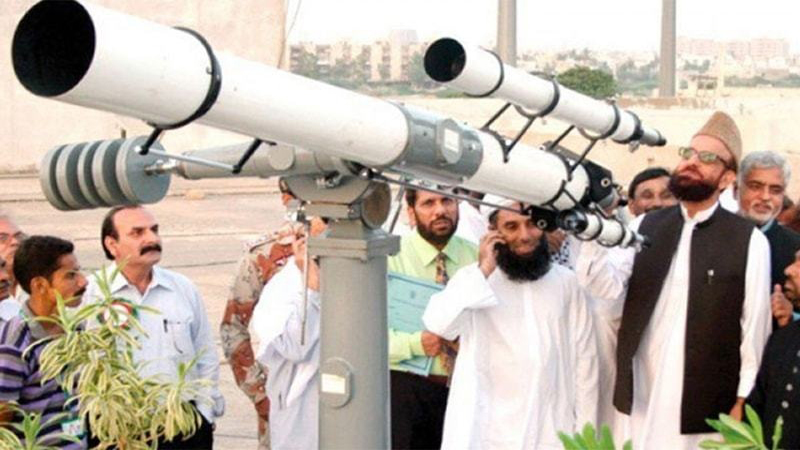 Even otherwise the display on the national hook-up of a hoard of religious divines with feeble or strained eye-sights desperately viewing the elusive moon through power telescopes right up to the Isha/Tarawih time (whereas a genuine moon could be located within 10 minutes after the sunset) presented a comic relief to the world and anguish to the Muslim community at large.

The main question which besets a common Muslim is: can’t Islamic Ummah agree on a consensus arrangement to do away with this yearly rigmarole?

It is remarkable to note that despite the presence of Islamic calendar, all the businesses in the state of Pakistan are governed under the Gregorian calendar, and Islamic calendar is invoked only for ascertainment of some important Islamic rituals and for no other purpose at all.

I have studied the matter in some depth and have reached the conclusion that due to some technical difficulties, the Ummah cannot chalk out a consensus Islamic calendar (lunar) due to varying movements and sighting of moon at different parts of the world. The Islamic calendar is based on the movements of the moon, as against the Gregorian calendar which is based on the movement of the Earth around the sun. Almost all Muslim countries practically use Gregorian Calendar because in their trade and commerce they are aligned with the Western block of nations where entire business is done under Gregorian calendar. Thus we just cannot divorce ourselves from the Gregorian Calendar under our severe social and economic compulsions.

The Islamic calendar also known as the Hijri year consists of 12 lunar months in a year of 354 or 355 days. The significance of the lunar month for Islamic countries is mainly to determine the proper days of Islamic holidays and rituals, such as the annual period of fasting and the proper time for the Hajj, the days of the month of Moharram and Rabiul Awal etc. The civil calendar of almost all countries where the religion is predominantly Muslim is the Gregorian calendar; with notable exceptions to this rule are Iran and Afghanistan, which use the Solar Hijri calendar. All businesses of life in these countries are carried out on the basis of Gregorian Calendar.

The Islamic calendar employs the Hijri era whose epoch was established as the Islamic New Year of 622 AD/CE. During that year, the holy prophet Muhammad (PBUH) and his followers migrated from Mecca to Medina and established the first Muslim community (ummah), an event commemorated as the Hijra. The current Islamic year is 1441 AH.

The solar year is “accurate” in the sense that the earth completes one revolution round the sun in 365.25 days. Moreover March 21 and Sept 21 are always the equinox, with almost no error. In the northern hemisphere, August is always midsummer and Christmas is always in winter, etc. The calendar corresponds to the seasons of the year which are similar in temperature and climate. One can always predict the nature of seasons, climate and even temperature in particular areas with full accuracy, whereas it is not possible in a lunar calendar.

Islam uses a pure lunar calendar, and the days of the year do not correspond to the seasons. One year, Ramazan is in the summer; a few years later, it is in the spring; etc. The lunar year falls short of the solar year by around 10 or 11 days. The early Muslims were not farmers, and it was not important that holidays fall at certain seasonal times.

The Jewish calendar follows a lunar calendar with certain adjustments; every so often a full month is added, so that the holidays come out in the right season. The early Israelites were farmers and shepherds, and the Jewish holidays correspond to harvest and planting time in ancient Israel. On the other hand, the new moon was important, and so a calendar was developed that was mostly lunar but due to adjustment, reflect the seasonal year.

Both calendars have their advantages and disadvantages, and the third type of calendar – the Jewish calendar – which is mixed and has some of the advantages of both.

The main question which besets a common Muslim is: can’t Islamic Ummah agree on a consensus arrangement to do away with this yearly rigmarole?

Most calendars aim at something like 12 months to a year, but it’s difficult for a calendar to synch up with both the sun and the moon, because they are not in synch with each other.

A lunar calendar loses this perfect synchronization with the seasons, through seasonal “drift,” so that the holy month of Ramadan may fall in summer one year, but over time, it will drift into other seasons. Eventually it will occur in winter. The reason is that a Muslim year is set to precisely 12 revolutions of the moon around the earth, but a solar year is based on one full orbit of earth around the sun.

The Islamic calendar, however, is based on a different set of conventions being used for the determination of the month-start-dates. Each month still has either 29 or 30 days, but due to the variable method of observations employed, there is usually no discernible order in the sequencing of either 29 or 30 day month lengths. Traditionally, the first day of each month is the day (beginning at sunset) of the first sighting of the crescent moon shortly after sunset. If the crescent is not observed immediately after the 29th day of a month (either because of clouds or because the western sky is still too bright when the moon sets), then the day that begins at that sunset is the 30th.

Given the fact that the moon sets progressively later than the sun as one goes west, with a corresponding increase in its “age” since conjunction, Western Muslim countries may, under favorable conditions, observe the new moon one day earlier than eastern Muslim countries. Due to the interplay of all these factors, the beginning of each month differs from one Muslim country to another, during the 48 hour period following the conjunction.

A number of Muslim countries try to overcome some of these difficulties by applying different astronomy-related rules to determine the beginning of months. Due to the somewhat variable nature of the Islamic calendar, in most Muslim countries, the Islamic calendar is used primarily for religious purposes, while the Solar-based Gregorian calendar is still used primarily for all matters of commerce and agriculture.

Since devising a consensus Islamic calendar is only a dream, hence to avoid dispute at the sighting of moon on the conclusion of Ramadan, the Holy month may be deemed to be alternately of 29 days for one year and of 30 days for the next year. In the alternative, the sighting may be allied with that of Saudi Arabia, which too may not provide a feasible solution for Pakistan. In that case the matter may be decided by the astronomical experts in the Ministry of Science and Technology which may then be officially enforced. In this age of scientific advancement, when astronomy can precisely predict the sighting of moon several hundred years ahead of time; putting up a show ad nauseam of religious clerics nervously trying to view endlessly for moon which is not there is enough to put us to sheer embarrassment before the entire world portraying us as nothing short of being nincompoops in this age and time.

The sighting of moon is not a religious matter, but is essentially a scientific matter to be decided by the astronomical experts.