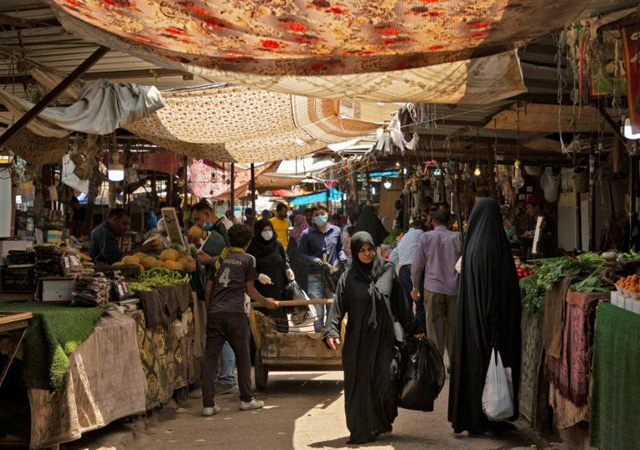 In Iraq, a national lockdown to halt the coronavirus pandemic has found some unexpected fans: local businesses who no longer have to compete with Turkish, Iranian or Chinese imports.

That includes everything from cars and computers to frozen chicken and even Iraq’s national fruit, dates, which in recent years were more often imported from the Gulf than plucked from local palm trees. Local producers were left in the dust, struggling to compete given their expensive raw materials and low outputs compared to the enormous quantities being imported.

Not anymore, said Amin Qassem, who has operated an ice cream factory in the oil-rich province of Basra since 2006. “The coronavirus crisis has allowed us to prove ourselves on the Iraqi market,” he said, relishing the sweet moment.

“When there was cheap ice cream coming in from Iran, I had to lower my prices to sell so that my ice cream wouldn’t be stuck melting in storage,” said Qassem.

“Now, I can sell at higher prices. We were able to win back the same markets where imports once crushed us.”

Out with the imports

Experts have long warned that oil-rich Iraq must diversify its economy to insulate it from the swings of the energy market.

As OPEC’s second-biggest oil producer, it relies on oil exports to fund more than 90 percent of its state expenses.

This year, with oil prices crashing to around a third of their 2019 prices, Iraq will struggle to keep its government running, pay salaries or import essential goods.

The International Monetary Fund projected Iraq’s imports of goods and services would drop from $92 billion in 2019 to $84 billion this year and to $81 billion in 2021.

Diversification has been a tall order for a country with a fledgling private sector, under-developed banking system and a weak customs regime that makes it cheaper to import than to produce.

But with coronavirus restrictions, all that could change.

As part of Iraq’s lockdown measures put in place in March, it has officially closed its federal border posts with Iran, Turkey and Kuwait to both people and goods.

Imports through Um Qasr, the southern port through which Iraq brings in crucial food and medicine, have dropped.

As a result, Iraq is importing less according to data from its trade partners.

It bought $973 million worth of Chinese goods in December but that dropped to $775 million by April, according to the Chinese General Administration of Customs.

Imports from Iran also fell from $450 million per month before the coronavirus pandemic to $300 million currently, according to Hameed Husseini, a member of the Iran-Iraq Chamber of Commerce.

Higher duties force Iraqi retailers to bump up the prices of imported goods, so local businesses can better compete in the markets.