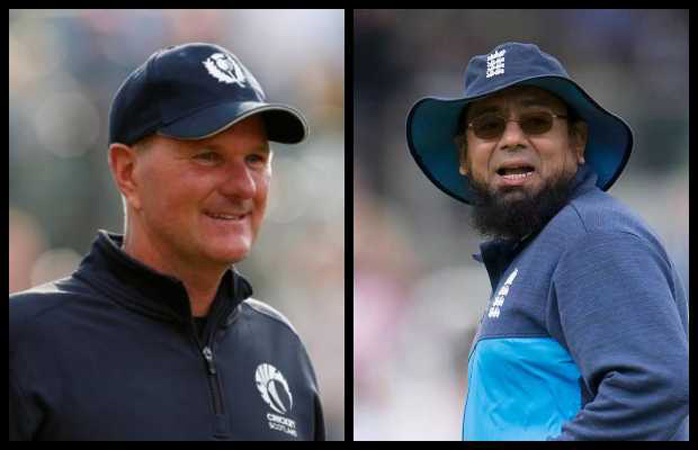 LAHORE: The Pakistan Cricket Board (PCB) on Thursday appointed Grant Bradburn as Head of High Performance Coaching and Saqlain Mushtaq as Head of International Player Development as part of its prestigious High Performance Centre’s restructuring. The restructuring is aimed at providing a clear pathway to the young and aspiring player support personnel and players within the game. In addition to the two former Test cricketers, LUMS graduate Asser Malik, who has a wide-ranging experience with various multi-national companies, has been confirmed as High Performance Operations Manager.The three appointments have been made following a robust recruitment process that included presentations by the candidates, followed by interviews conducted by a high-powered panel that also included members of the PCB Cricket Committee.

Bradburn is presently the fielding coach of the Pakistan men’s national team, a role he took in September 2018 following a successful coaching stint with the Scotland men’s national cricket team. An off-spinner who played seven Tests and 11 ODIs from 1990 to 2001 for New Zealand, Bradburn also coached New Zealand A and New Zealand Under-19.Bradburn, a Level III coach, will be responsible for raising the overall standard of player support personnel across all the high performance centres of the country. He holds a strong reputation of creating united and successful environments with a strong focus on bringing new methods on coaching through individual learning and through developing systems that provide consistent feedback, assessment and support that ultimately fosters coaches’ development.

Saqlain played international cricket between 1995 and 2004 and will be responsible for identifying, developing and preparing players so that they could go on to become world-class cricketers.Saqlain, known for introducing the Doosra, in his first full year (1996) with the Pakistan national men’s cricket team at the age of 18 established a record for the most ODI wickets in a calendar year (65). He then did even better the following year, setting a mark (69) that still stands. His impact was so great that he became the fastest bowler in history in terms of time (one year and 225 days) to reach the landmark of 100 ODI wickets, and to this day, no one else has got there in less than two years. Saqlain, also a Level III coach, has previously worked as a spin bowling coach with Bangladesh, West Indies and England men’s cricket teams, apart from serving as a consultant for PCB, Cricket Australia and New Zealand Cricket.

Bradburn said in a statement: “I am honoured that my association and relationship with Pakistan cricket continues. I consider it a privilege to work here in Pakistan among highly skilled players and coaches, while I have realised there is incredible talent and passion for the game in this country. I now aim to support our best players by enabling our current and future coaches with the skills they need to create world’s best players and winning environments. In turn, this proud cricket nation will aim to become self-reliant on cricket coaching resources that are both world leading and uniquely Pakistan. I have attended meetings with other members of the High Performance Centre and have been impressed with their approach, vision and strategy. I am looking forward to making a meaningful contribution during my time at the High Performance Centre and I plan to succeed in creating an environment which all coaches will find challenging, productive and rewarding.”

Saqlain said: “It is an honour and a privilege to represent Pakistan. In this background, I am delighted to have been offered this exciting opportunity to work on skilful and exciting young cricketers and help them grow in their careers. I have previously worked with a diverse group of cricketers and helped them improve their cricket. I am confident I will be able to translate all my knowledge and experience in the High Performance Centre and help the PCB raise the bar and set new benchmarks. Before agreeing to the role, I had a look at a number of things, including the cricketing environment and people I will be working with. I think the vision, aspirations and strategy of the PCB is heading in the right direction and, as such, it is the right time to join the high performance team in Lahore and try to take Pakistan cricket back to its glory days.”

PCB Chief Executive Wasim Khan said: “The High Performance Centre is the heart of Pakistan cricket, which will ultimately set the direction of Pakistan cricket’s future. The unique skills and understanding that each of these individuals have of their specific areas will help create alignment to International standards and best practices. The PCB’s objective is to help the men’s national team reclaim their top rankings and we will leave no stone unturned in creating opportunities and providing tools to the players to achieve these targets. I am confident the team of Nadeem Khan, Grant Bradburn and Saqlain Mushtaq will create greater alignment between domestic and International cricket, make our high performance programs relevant in the modern world and will drive the standards and levels of professionalism required within our system.” The PCB will announce Bradburn’s replacement in the men’s national cricket team in due course.