Bolsonaro follows Trump on virus, and then some 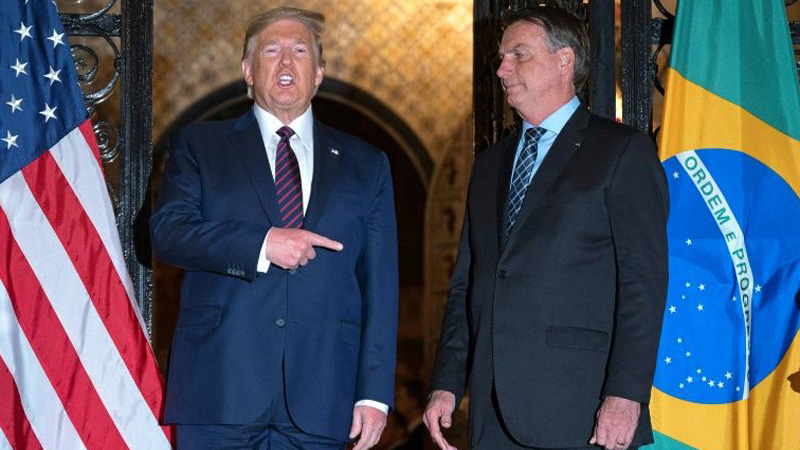 Brazilian President Jair Bolsonaro, who is often compared to his US counterpart, Donald Trump, has followed in his footsteps on the coronavirus crisis — and gone even further.

Known for their shared talent for vitriol, social media rants and riling up their conservative bases, Trump and Bolsonaro have followed the same script on the virus: downplay its severity, don’t sweat the facts, bet big on hydroxychloroquine, get the economy reopened.

In February, Trump told Americans the virus could “miraculously” disappear with warmer weather; in March, Bolsonaro told Brazilians not to pay attention to the “hysteria” around it and compared it to a “little flu.”

But the two countries were on their way to having the highest number of coronavirus cases in the world, with nearly 100,000 deaths in the US and 24,000 in Brazil.

Showing their disdain for medical experts, both presidents have flouted their advice.

Trump refuses to wear a face mask in public and proudly played golf Saturday; Bolsonaro ditches his mask to greet and hug supporters at rallies, and has been hosting barbecues, hitting the shooting range and going out for hotdogs.

The man called the “Tropical Trump” has also been criticized for a lack of empathy for victims and his quizzical remarks on the virus, once saying Brazilians’ immune systems were so strong they could swim in raw sewage and “not catch a thing.”

Like the US, Brazil is a federation of states, and like Trump, Bolsonaro has berated governors for imposing what he calls “the tyranny of total quarantine.”

Bolsonaro even called the governors of Sao Paulo and Rio de Janeiro “piece of shit” and “pile of manure” in a video-taped cabinet meeting that recently became public.

“They both followed the same strategy, which is to distance themselves from the economic crisis which will come and to blame other political actors, like governors,” said Oliver Stuenkel, a professor of international relations at the Getulio Vargas Foundation.

There is one important difference, though. Trump has softened his tone as the United States has emerged as the epicenter of the pandemic, and on Sunday banned travel from Brazil following the surge in cases there. Bolsonaro, meanwhile, continues to divide Brazilians by politicizing the outbreak.

Beyond that, the parallels go on.

“It is Trumpian, this necessity to find enemies, but a typical authoritarian populist tradition to look for scapegoats,” said Stuenkel.

“Authoritarian leaders are quick to find those to blame.”

Then there is the treatment debate.

Both presidents have touted the drugs chloroquine and hydroxychloroquine as promising treatments for COVID-19.

Trump even revealed last week he was taking hydroxychloroquine as a preventive measure. He said Sunday he had finished his course of treatment.

Bolsonaro’s government meanwhile recommended the drugs for anyone with coronavirus symptoms, even after the WHO discontinued clinical trials because of safety risks.

While Trump says it’s “time to go back to work,” Bolsonaro says “Brazil can’t stop,” warning that the alternative is “poverty and hunger.”

However, while the United States has passed a record $2-trillion economic rescue package, and is preparing to spend even more, Brazil has stuck to relatively modest emergency spending measures so far.

“Bolsonaro, like Trump, doesn’t want to be held responsible for an economic crash,” said Juliette Dumont of the Institute of Latin American Studies in Paris.

Both presidents were banking on a booming economy to help them win re-election — Trump in November, Bolsonaro in 2022.

“There are striking similarities, there is total alignment with the United States that is unprecedented in Brazilian history, but there is one key difference,” said Dumont.

“Trump had to change his tune, while Bolsonaro is still charging ahead.”

Both are facing backlash, too, not only on coronavirus.

Trump survived impeachment in February; Bolsonaro is facing 35 different impeachment attempts in the lower house of Congress, some for his handling of the health crisis.

But analysts say the risk he will be removed from office is small, for now.

Brazil’s opposition is “almost inaudible,” and its system of checks and balances “less effective,” said Dumont.

And Bolsonaro retains a hard-core base of far-right support, even if his disapproval rating has been rising.

“Bolsonaro has a freer hand than Trump, who is constrained by institutions and has te be more presidential,” said Stuenkel.