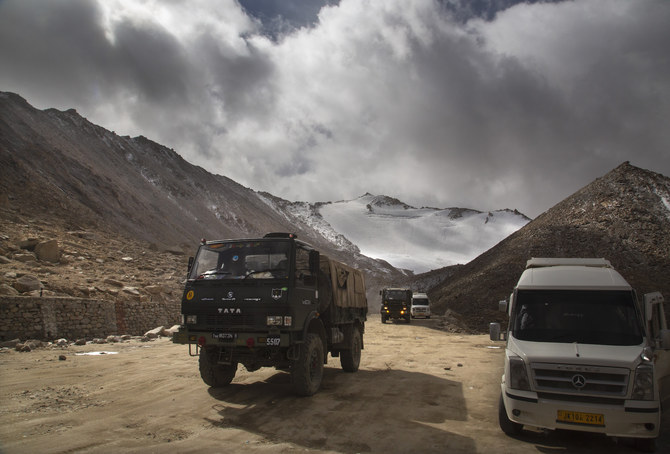 SRINAGAR: Indian and Chinese soldiers are in a bitter standoff in the remote and picturesque Ladakh region, with the two countries amassing soldiers and machinery near the tense frontier, Indian officials said.
The standoff began in early May when large contingents of Chinese soldiers entered deep inside Indian-controlled territory at three places in Ladakh, erecting tents and posts, the officials said this week.

They said the soldiers ignored repeated verbal warnings, triggering a yelling match, stone-throwing and even fist fights in at least one place along Pangong Lake, the site of several such confrontations in the past.
The five officials, including two military, two police and one civilian administrator, spoke on condition of anonymity because of the sensitivity of the matter.

Chinese foreign ministry spokesperson Zhao Lijian said Wednesday that the situation on the China-India border was “generally stable and controllable.”

The sides were communicating through both their front-line military units and their respective embassies to “properly resolve relevant issues through dialogue and consultation,” Zhao said at a news conference in Beijing.
China is committed to abiding by agreements signed by the sides and to “maintaining peace and stability in the border area between China and India,” Zhao said.
The Chinese and Indian soldiers also faced off along a frontier in India’s northeastern Sikkim state in early May.
Indian media quoted Gen. Manoj Mukund Naravane, the country’s military chief, as saying the incidents in Ladakh and Sikkim had led to injuries caused by “aggressive behaviour on both sides.”
President Donald Trump said the US was willing to act as a mediator between the two Asian giants.

“We have informed both India and China that the United States is ready, willing and able to mediate or arbitrate their now raging border dispute,” Trump tweeted Wednesday.
Though skirmishes aren’t new, the standoff has escalated in recent weeks at Ladakh’s Galwan Valley, where thousands of soldiers from the two countries have camped just a few hundred meters from each other, the Indian officials said.

India is building a strategic road through the Galway Valley connecting the region to an airstrip.
The China-India border dispute covers nearly 3,500 kilometers (2,175 miles) of frontier that the two countries call the Line of Actual Control. The countries fought a bitter war in 1962 that spilled into Ladakh.
The most serious dispute is over China’s claims that India’s northeastern state of Arunachal Pradesh is part of Tibet, which India rejects.

India unilaterally declared Ladakh region a federal territory while separating it from disputed Kashmir in August 2019. China was among the handful of countries to strongly condemn the move, raising it at international forums including the UN Security Council.
In the past, most disputes between China and India have been resolved quickly through meetings between local military commanders, while some required diplomatic intervention.