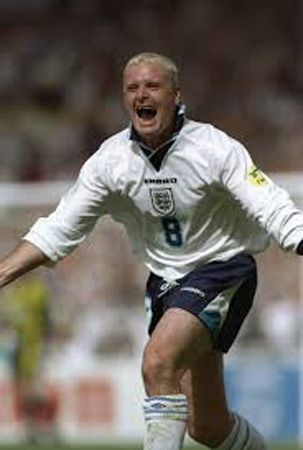 LONDON: Paul Gascoigne’s tears in Turin captivated a nation and once they had fallen in love with the prodigiously talented but delicate England playmaker, they could never take their eyes off him, no matter how painful it was to keep looking. “Part of his genius, part of his magnificence is the fact he is so vulnerable,” said Gary Lineker in 2015 documentary film ‘Gascoigne’ on the life of the mercurial midfielder. Lineker was the one who fired a 23-year-old Gascoigne a warning upon returning home after being England’s stand-out player at the 1990 World Cup in Italy: be careful. As ‘Gazza’ turns 53 today, enjoying some rare respite in what has been a turbulent and often tragic life, it is fair to suggest he did not take Lineker’s advice seriously.

Alex Ferguson had made it his mission to sign Gascoigne from Newcastle United after seeing him torment his Manchester United side, the youngster’s confidence summed up by knocking the ball through an opponent’s legs and patting him on the head. But Gascoigne instead chose to sign for Tottenham Hotspur, who offered to buy his mother a house, his father a car and his sister a sunbed. Gascoigne has admitted regretting not joining Ferguson, who may have kept him on a tighter leash than at Tottenham, where he indulged in London’s night life and claimed he once brought an ostrich to training.

Then again, the cruel fate of Gascoigne’s career hinged just as much on bad decisions as terrible injuries, beginning with shattering his knee in the 1991 FA Cup final. He was never the same player from then on, and he suffered another serious knee injury in a Newcastle nightclub later that year, then ripping his ankle in training with Lazio in 1994. Perhaps his most productive spell came with Rangers, where he was idolised for leading the team to back-to-back league titles. Yet even at his best, he still managed to land himself in trouble, receiving death threats from the IRA following a goal celebration which stoked tensions with Glasgow’s Catholic population.

If one moment could sum Gascoigne up, though, it was his majestic goal at Wembley against Scotland at Euro 96 and the iconic celebration which mocked the media furore over his binge-drinking in Hong Kong before the tournament. His England career came to a sad end when he was excluded from the 1998 World Cup squad and in a rage trashed coach Glenn Hoddle’s hotel room. Gascoigne’s much-publicised drinking spiralled out of control soon after when he ended up in a rehabilitation centre. His troubles escalated following his retirement from football in 2004 which he said “ripped the heart out of me”. Gascoigne has also been treated for drug addiction, paranoia and depression. Last year he revealed he had pellets sewn into his stomach to prevent him from drinking.

“I know how to stay sober and I know how to relapse. I’m good at both,” he said in 2015. “I’ve been close to death twice, I’ve managed to pull through and sometimes I haven’t, it’ll be like that for the rest of my life.” Gascoigne’s fraught battle with addiction did not diminish his contemporaries’ reverence for him, however. “He was the best I ever played with. He was genuine and honest but he was absolutely crazy,” former England team mate and Newcastle United striker Alan Shearer told ChronicleLive in 2016. Wayne Rooney added in the 2015 film: “He is probably the most exciting English player I’ve seen and certainly the best.”