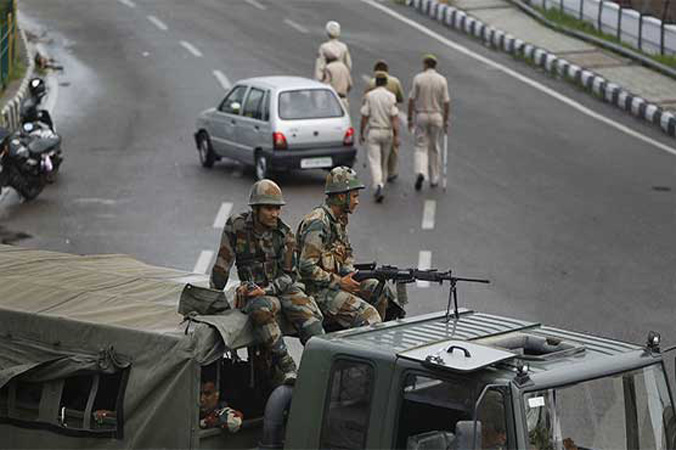 While the whole Muslim Ummah enjoyed the joys of Eid-ul-Fitr, the Muslims of occupied valley of Kashmir observed the religious festival under strict military siege illegally imposed by India. The Indian security forces imposed severe restrictions and deployed troops and police personnel in every nook and corner of the occupied territory to prevent people from offering Eid prayers and staging anti-India demonstrations.

Meanwhile, defying restrictions, Kashmiri people held forceful anti-India demonstrations in Srinagar, Pulwama, Islamabad, Shopian, Badgam and other areas on the Eid day. They raised high-pitched anti-India and pro-freedom slogans. Indian troops and police personnel used brute force at many places, triggering clashes. Several people sustained injuries during the clashes. Indian troops also arrested at least six youth during cordon-and-search operations in Badgam and Pulwama areas. India has turned the occupied valley into world’s largest prison where people are not even allowed to go out of their homes to purchase essential commodities. Besides, thousands of Kashmiris are illegally detained in different Indian jails who spent Eid hundreds and thousands of miles away from their loved ones.

The Indian troops have been committing grave human rights violations in the occupied valley for the past over seven decades to suppress the Kashmiris’ ongoing struggle for securing freedom from India’s illegal occupation of their homeland. The atrocities have increased to an alarming proportion after Narendra Modi-led communal government repealed the special status of occupied Kashmir on August 05 last year. Killings, arrests and torture by Indian forces have become a norm in the occupied valley and people are not safe in their homes as door-to-door searches are being carried out by Indian forces even during the coronavirus pandemic. Recently, the troops damaged over 750 houses, shops and vehicles in Badgam district and also blasted at least 20 houses in Nawakadal area of Srinagar besides looting everything including cash, jewellery and gas cylinders.

He said India’s plan needs to be resisted individually as well collectively by not cooperating with outsiders, be labourers or students residing in the territory no matter for how many past years, as they are stooges of India. Those, he warned, who would collaborate India to accomplish its nefarious agenda in Jammu and Kashmir would face the wrath of the people.

UN Secretary-General Antonio Guterres has also voiced his ‘total commitment’ to rejecting anti-Muslim bigotry, hate and all forms of intolerance, urging all to draw from Ramazan the lessons of compassion, mutual respect and solidarity.