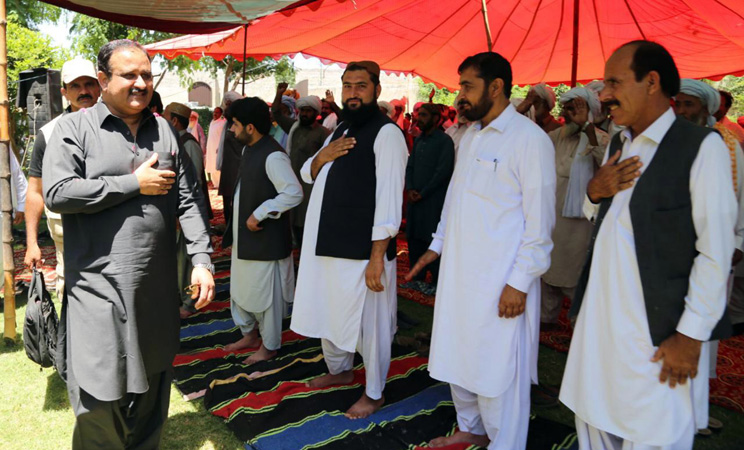 Punjab Chief Minister Sardar Usman Buzdar went to Barthi on the 3rd day of Eid and met tribal leaders and people and greeted them Eid at Buzdar House Barthi.

He said that he is with the people of area on the occasion of Eid. Former rulers completely neglected the backward areas of the Punjab, he added. Peoples’ problems of far-flung areas increased, due to the wrong priorities of former rulers. Self-obsessed leaders launched the projects for their self-projection. People did not get any benefit from these projects and national resources were wasted. He said that PTI government has focused to fulfil the needs of the people and we are pursuing the policy of equal and balanced development of every areas. He said that his relations with the people have further strengthened. He said that public service is in his blood.

Usman Buzdar said that he is determined to change the destiny of the people of the province. He said that we did not betray the people and every citizen of Punjab is very close to my heart like people of Barthi. I can understand the problems of the people and I will not break the connection with them. He said that who knows the backwardness and deprivations of backward area better than him. While talking on this occasion localities said that Usman Buzdar is public leader in true sense and he is people-friendly leader like his father. They said that Usman Buzdar did not forget his area even after becoming Chief Minister. They were of the view that by making Usman Buzdar chief minister, Prime Minister Imran Khan has done a great job for the people of backward area.

Meanwhile, Usman Buzdar visited Musakhel, the most backward district of Balochistan, on the 3rd day of Eid. Tribal leaders and other notables of the area called on CM Punjab. Usman Buzdar greeted Eid with the tribal leaders and localities. Usman Buzdar announced to establishment Rescue 1122 in Musakhel as well as setting up of Bank of Punjab Branch, installation of ATM machine on the behalf of Punjab government. He also announced to set up NADRA office in Musakhel. He said that more steps will be taken in this regard after consulting with federal government. He said that buses will also be provided for the colleges in Musakhel.

Usman Buzdar said that 4X4 vehicles will be provided for the Rescue 1122 station. Setting up 1122 station will provide relief to the residents of Musakhel, tribal area of Punjab and adjoining areas of KPK. He said that this area was neglected for the decades whereas PTI government considers the development of backward areas as its mission. He said that I came to the Baluchistan with the message of good-will and love for the Balochi people. He said that amount has been deposited for the supply of electricity in Darg the tehsil of Musakhel. Electricity will be reached in the areas of Jaffar, Qaiserani and Buzdar tribes. Usman Buzdar said that he is the first Chief Minister who visited the backward area of district of Musakhel in the last 73 years. He said that Baluchistan is his second home and he has relationship of love and brotherhood with the people of Baluchistan. He said that Punjab will extend all out cooperation with Baluchistan government for setting up rescue 1122 station. He further maintained that Punjab government will provide free of cost training in this regard. I will again visit Baluchistan, Usman Buzdar added.

He said that pilot Sajjad Gul got martyrdom while discharging his duty and it’s our faith that martyrs are alive. May Allah Almighty grant you courage and strength to bear this loss with fortitude. He further maintained that Karachi Plane Crash is a national tragedy on which the whole nation is aggrieved. Government equally share the grief of the families of the martyrs and our sympathies are with them. He said that only those realize the intensity of sorrow and grief who lost their love ones. The Punjab government stands with the bereaved families in this hour of grief.

Also, Usman Buzdar took notice of abduction of three policemen in Kacha area of Rojhan and sought a report form Inspector General Punjab Police. He has directed to ensure the safe recovery of police personnel and said that the elements involved in this kidnapping should be brought to book as soon as possible. Every necessary step should be taken for the recovery of police personnel CM added.

Usman Buzdar offered Eid-ul-Fitr prayers on the lawn of the CM’s Office. The CM greeted Eid with the people while maintaining social distance. The chief minister prayed for the development, prosperity, stability and peace of the country. He also prayed for the martyrs of Corona and the plane crash. He prayed that may Allah Almighty grant higher place in haven to those who sacrificed their lives for maintaining peace in the country. He expressed complete solidarity with the families of the martyrs and said that today we have to remember the family members of the martyrs. Usman Buzdar prayed that Pakistan may achieve the goal of development and prosperity.

Usman Buzdar also took notice of murder of Haifz e Quran student in the area of Kasur and sought a report form Inspector General Punjab Police. He said that those involved in this incident deserve stern punishment according to law. He directed that challan, against the accused, should be submitted into the court after complaint the legal formalities at the earliest. He said that those who involved in this heinous act of murdering innocent student deserve no mercy. He said that ensuring justice to the family of Hafiz-e-Quran is his responsibility. He assured them that justice will be provided to them at any cost. The chief minister expressed sorrow and grief to family of deceased student and said that he equally share their grief. He said I am not able to bring back your blue eye son but I assure you that justice will not only be provided to you but will be seen.

Sardar Usman Buzdar also expressed deep sense of sorrow and grief over the death of two sisters being drowned in Chenab River near Muzaffargarh. Usman Buzdar has sought a report from Commissioner Dera Ghazi Khan Division about the incident.

Buzdar also expresses deep sense of sorrow and grief over the death of 4 members of the same family in a train-car collision at the railway crossing near Patoki. Usman Buzdar extended heartfelt sympathies and condolences to the bereaved family members. He also sought a report from the administration about the accident. He said that leaving the Railway crossing gate open on the arrival of a train is a serious negligence. He directed to identify those who are responsible of this criminal negligence and take legal action.