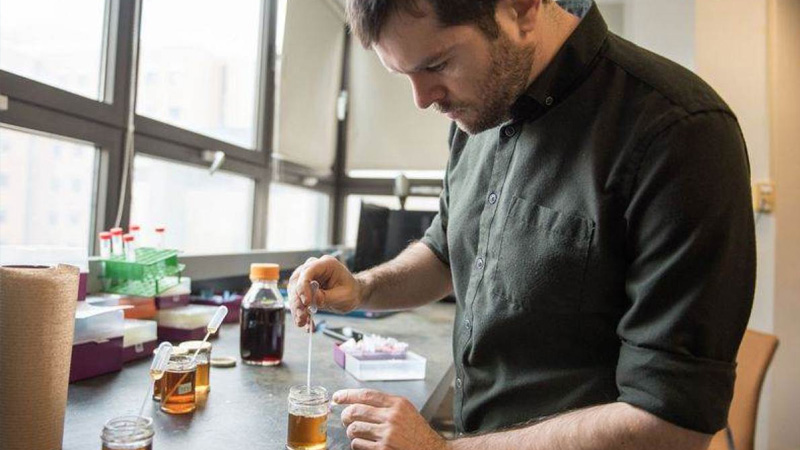 Not all maple syrups are created equal. There are actually over 60 taste categories that syrups fall into, as determined by human taste-testers. Soon, though, a solution containing gold nanoparticles could save those people some work. The flavor of maple syrup is influenced by factors such as the growing region, weather, time of harvest, production process, and storage methods. Some of the resulting syrups are of premium quality, ending up being bottled and sold on supermarket shelves. Others, though, aren’t quite so tasty – these are often sold to food companies, which use them as natural sweeteners in their products.

In an effort to more quickly sort syrups into one grade or the other, scientists at Canada’s Université de Montréal have developed what’s described as an “artificial tongue.”

In fact, it’s actually a liquid consisting of gold nanoparticles suspended in water. Ordinarily, the solution has a reddish color, which remains when a few drops of consumer-grade maple syrup are introduced. If the syrup is of a lower taste-grade, however, its telltale combination of organic molecules causes the nanoparticles to clump together, turning the solution blue within 10 seconds.

The technology was tested on 1,818 maple syrup samples gathered from different parts of the province of Quebec, which is the world’s largest syrup-producing region. As compared to traditional taste-testing, the “tongue” was found to be 98 percent accurate at differentiating between consumer- and industrial-grade syrups.

It is hoped that once developed further, the solution could be used onsite at growers’ “sugar shacks,” allowing them to immediately sort their syrups into one grade or the other. This would spare taste-testers the task of sampling the lower-grade syrups, so they could concentrate on determining which specific categories the higher-grade syrups belong in.