* Minister says inquiry will be completed in three months
* Announces Rs 1 million compensation for heirs of the dead, Rs 0.5 million for survivors 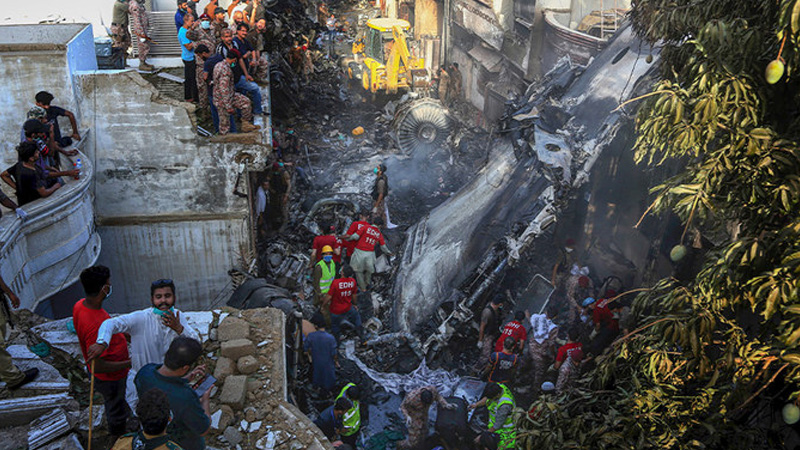 Addressing a news conference along with PIA CEO Arshad Malik here in Karachi, Ghulam Sarwar said a clear and transparent investigation into the incident will be held and that every effort will be made to complete the inquiry report within three months. “We will try to complete plane crash inquiry report in three months,” he said, adding that inquiry of Chitral plane crash incident has not completed yet.

The minister said that they are ready to present themselves for accountability if the inquiry team finds aviation ministry responsible for the incident. “A special forensic team from Lahore has reached Karachi. Twenty-one bodies have been handed over to the families,” he said.

The minister said a number of illegal constructions have been made around the Karachi airport, adding that 1500-acre land of CAA in Karachi has been encroached upon. He said the pilot tried his best to land plane on the runway and keep the loss of human life at a minimum.

The minister also announced a compensation of Rs 1 million for the families of those who were killed in the plane crash. He said the government will bear all the expenses for the repair and restoration of the damaged houses. “We will be handing over the insurance money and one million rupees in compensation to the families who lost their loved ones in the PIA PK-8303,” he said. “Nothing can really compensate those families,” he said, adding that it will be Rs 500,000 for the survivors.

The engineering and maintenance department of the Pakistan International Airlines (PIA) on Saturday released a brief on the technical history of the Airbus A-320 that crashed into a residential area near Karachi airport a day ago.

According to the summary, the last check of the plane was done on March 21 this year and it had flown from Muscat to Lahore a day before the crash. The report added that there was ‘no defect related to the engine, landing gear or major aircraft system’. The summary further said the health of both engines was ‘satisfactory’ and maintenance checks were being performed at intervals. The report also revealed that the aeroplane was declared fit for flights till Nov 5, 2020, by the CAA.

Meanwhile, aircraft manufacturer Airbus in a statement said the aircraft in question had logged around 47,100 flight hours and 25,860 flight cycles and was powered by CFM56-5B4/P engines. The company said it is providing full technical assistance to Pakistani authorities in charge of the investigation.

The flight data recorder and cockpit voice recorder have been recovered from the site of the crash, a PIA spokesman said on Saturday. “The black box had been found late on Friday; we are handing it over to the inquiry board,” he added. news desk