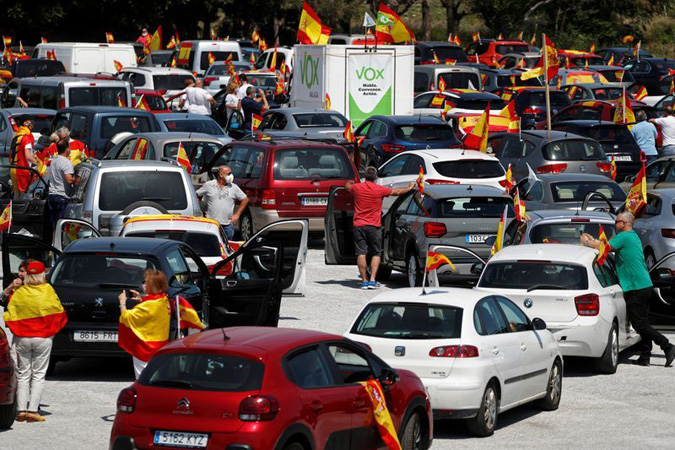 Thousands of cars and motor-bikes honking horns and waving Spanish flags drove in procession through Madrid on Saturday as part of a nationwide protest called by the far-right Vox party against the country’s coronavirus lockdown.

Spain, which imposed one of Europe’s toughest lockdowns on March 14, has started to ease restrictions, but Madrid and Barcelona have remained in lockdown for longer because of more severe coronavirus outbreaks.

The protesters called for Prime Minister Pedro Sanchez and Deputy Prime Minister Pablo Iglesias, of the centre-left Socialists and left-wing Podemos coalition, to resign over their handling of the coronavirus crisis, and, in particular, the lockdowns and the damage done to the economy and jobs.

“It is time to end the #stateofabuse that Pedro Sanchez and Pablo Iglesias are using to gag Spaniards,” Vox said in a statement, referring to a Twitter hash tag.

“It is time to make a big noise against the government of unemployment and misery that has abandoned our self-employed and workers.”

Vox leader Santiago Abascal, who was leading the procession in Madrid, made a speech that was broadcast on EsRadio so people could listen in their cars. He said the government was “directly responsible for the worst management of this crisis on the entire planet.” Sanchez is due to make a speech later on Saturday that will be broadcast on television. Protests against the lockdown started in Madrid’s wealthy Salamanca neighbourhood last week, where people started banging pots and pans. But Saturday’s procession marked the first organised protest against the government since the beginning of the coronavirus pandemic. Vox urged people to protest in every regional capital, and similar car processions took place in Seville and Barcelona, among others.