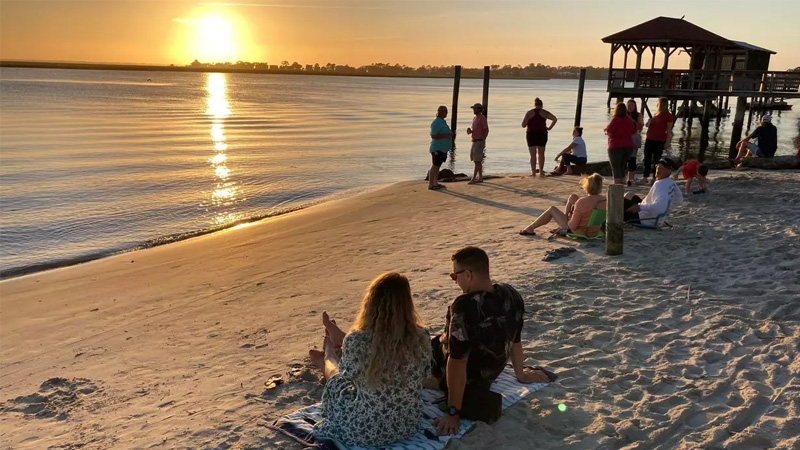 Tired of claustrophobic coronavirus stay-at-home orders, some restless Americans are opting for a change of scenery and heading to states like Georgia and South Carolina, preferred destinations of quarantine-defying tourists.

Ghosts are no longer the only ones wandering the shady, tree-lined squares of seductive Savannah, promoted as one of the most haunted cities in the United States.

After Georgia’s Republican governor began lifting state restrictions in late April, one of the nation’s first major steps towards a return to normalcy, nighttime tours have resumed in this tourism pearl of the Deep South.

Trolley buses, their suspensions straining on the cobblestones of the historic district, have resumed their routes, albeit with social distancing measures in place.

And the souvenir stands and praline candy shops are once again busy along the riverfront of this former slave port, one of the oldest cities in the country.

Arthur Parker, a 56-year-old New Yorker, had long dreamed of visiting Savannah and taking his family on a leisurely stroll in the shade of the city’s famous majestic oak trees draped in Spanish moss.

The pandemic — whose death toll is rapidly nearing 100,000 in the US — gave him a good excuse to escape the nation’s COVID-19 epicenter and make the 12-hour drive south.

“New York is so depressing nowadays,” he sighed from a cafe terrace. “Everything is closed, the streets are empty, people are scared. We needed a change of scenery.”

Parker told AFP that his family was “getting weird looks when we say we’re from New York. So we’re trying to hide it, but our Brooklyn accent gives us away.”

After losing substantial bookings in March and April, normally two of the busiest tourist months in Savannah, Jonathan Morgan has seen customers gradually return to his three bed-and-breakfast properties in recent weeks.

“We have two kinds of tourists: one which comes on an airplane and one which is driving through,” he explained. “It’s been mostly regional tourism lately, people coming on a one-day drive into Savannah.”

Many of the visitors are young, Morgan said, part of “a whole generation which is not really affected by COVID-19” and who are eager to travel.

Among them is Kaycee, a student from Texas. She had intended to visit Paris to celebrate her college graduation but instead fell back on Savannah, where she stayed in Morgan’s elegant Victorian mansion decorated in a French theme.

“It feels like being in Paris, we’re just missing the Eiffel Tower,” Kaycee consoled herself.

As for the safety of tourism during a pandemic: “I’m not worried at all,” she insisted. “I wouldn’t be traveling otherwise.”

Two hours’ drive up the US East Coast, tourists were less visible in the city of Charleston, South Carolina, which reopened a bit later than neighboring Georgia.

With temperatures on the rise, many preferred the beach, including Anne Miller, a twenty-something tourist from Ohio who recently gathered with a dozen friends for a weekend getaway at nearby Folly Beach.

“We were just tired of waiting to get a normal life again, to get our freedom back. So we rented this big house by the beach for an end-of-quarantine party,” said Miller, her shoulders reddened by the sun.

In the seaside resort’s crowded restaurants and bars, customers, almost all without masks, were not even pretending to abide by social distancing guidelines as they mingled and dined on platters of shrimp, the area specialty.

There was hand-shaking, jostling, kissing on the cheek.

“It feels like the virus never got here!” said Anne, grateful for the opportunity to spend some of the money she saved over two months of home confinement.