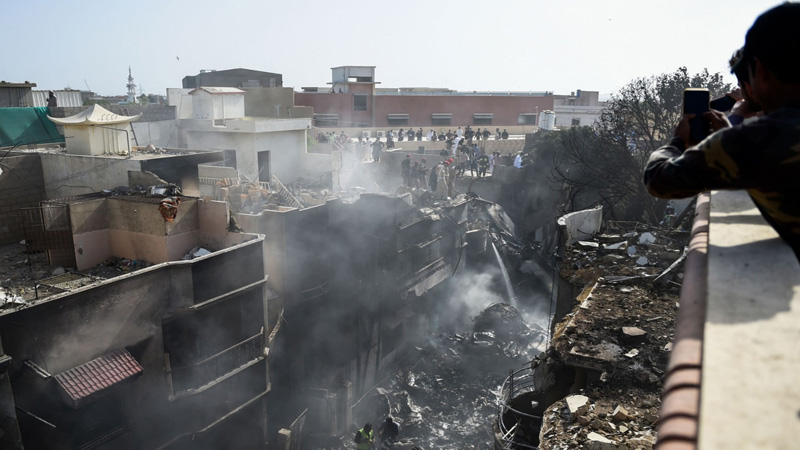 A jetliner carrying 98 people crashed Friday in a crowded neighbourhood near the airport in Karachi after an apparent engine failure during landing. Officials said there were at least two survivors from the plane, and it was unknown how many people on the ground were hurt, with at least five houses destroyed.

The pilot of Pakistan International Airlines Flight 8303 was heard transmitting a mayday to the tower shortly before the crash of the Airbus A320, which was flying from Lahore to Karachi and carrying many traveling for Eid ul Fitr. Video on social media appeared to show the jet flying low with flames shooting from one of its engines.

The plane crashed about 2:39 pm northeast of Jinnah International Airport in Model Colony between houses that were smashed by its wings. Police in protective masks struggled to clear away crowds amid the smoke and dust so ambulances and fire trucks could reach the crash site. As darkness fell, crews worked under floodlights, and a portable morgue was set up. At least 66 bodies were recovered, health department officials said, and PIA chairman Arshad Malik said finding all the dead could take two to three days. 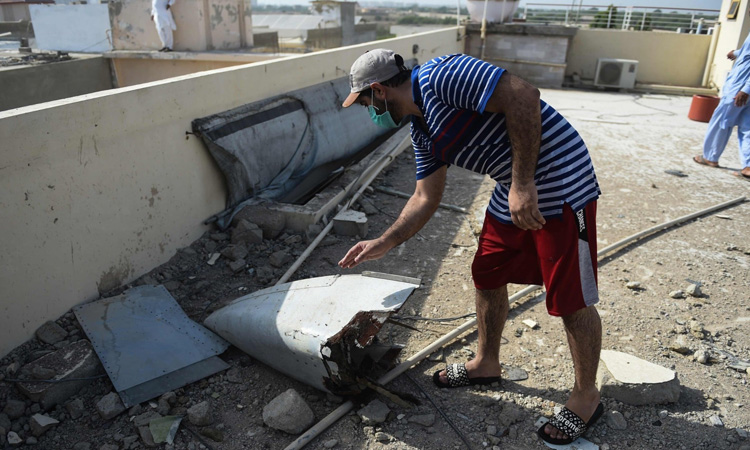 The Civil Aviation Authority said the plane had 91 passengers and a crew of seven. At least three people on the ground were injured.

Eyewitnesses said the Airbus A320 appeared to attempt to land two or three times before crashing in a residential area near the airport. “The aeroplane first hit a mobile tower and crashed over houses,” witness Shakeel Ahmed said near the site, just a few kilometres short of the airport.

Footage showed plumes of smoke rising from the site of the crash within the congested residential area. Ambulances and rescue officials arrived at the scene to help residents. Eyewitnesses said the plane was on fire in the air before crashing.

Videos from the crash site showed bodies buried underneath rubble and residents gathering in streets littered with debris while Rangers and Sindh police carried out rescue operations. 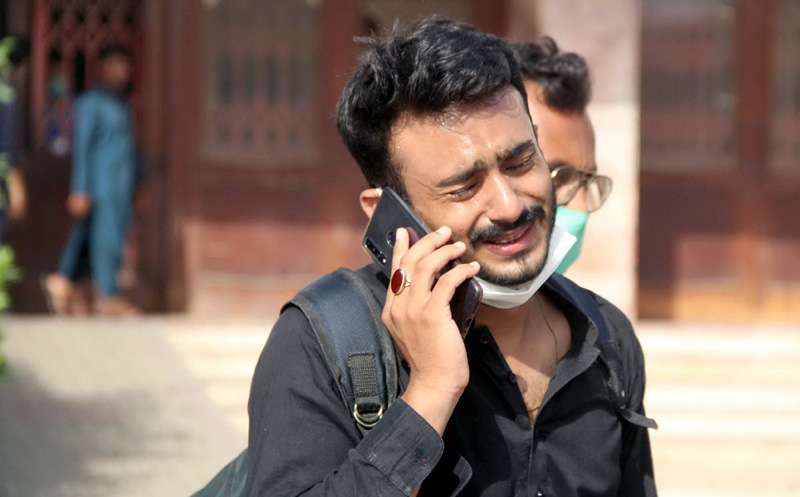 Another video showed Edhi workers and firefighters hosing down the remains of the aircraft and searching for survivors.

Troops from the Pakistan Army’s Quick Reaction Force and Pakistan Rangers Sindh arrived at the crash site shortly after to assist the civil administration in relief and rescue efforts. Additionally, an Army Urban Search and Rescue Team has been dispatched via a C-130 military plane from Rawalpindi. According to ISPR, 10 army fire tenders are taking part in the rescue efforts as well as multiple military ambulances. 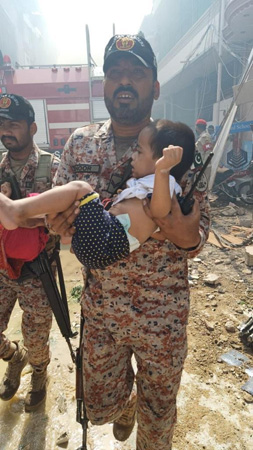 Airworthiness documents showed the plane last received a government check on Nov 1, 2019. PIA’s chief engineer signed a separate certificate April 28 saying all maintenance had been conducted. It said “the aircraft is fully airworthy and meets all the safety” standards.

Ownership records for the Airbus A320 showed China Eastern Airlines flew the plane from 2004 until 2014. The plane then entered PIA’s fleet, leased from GE Capital Aviation Services.

Perry Bradley, a spokesman for GE, said the firm is ‘aware of reports of the accident and is closely monitoring the situation’.

Airbus said the plane had logged 47,100 flight hours and 25,860 flights as of Friday. The plane had two CFM56-5B4 engines. Airbus said it would provide technical assistance to investigators in France and Pakistan, as well as the airline and engine manufacturers. “We at Airbus are deeply saddened by the tragic news of flight #PK8303,” tweeted Executive Director Guillaume Faury. “My thoughts and those of my Airbus colleagues, go to the families and loved ones affected. In aviation, we all work hard to prevent this. Airbus will provide full assistance to the investigating authorities.”