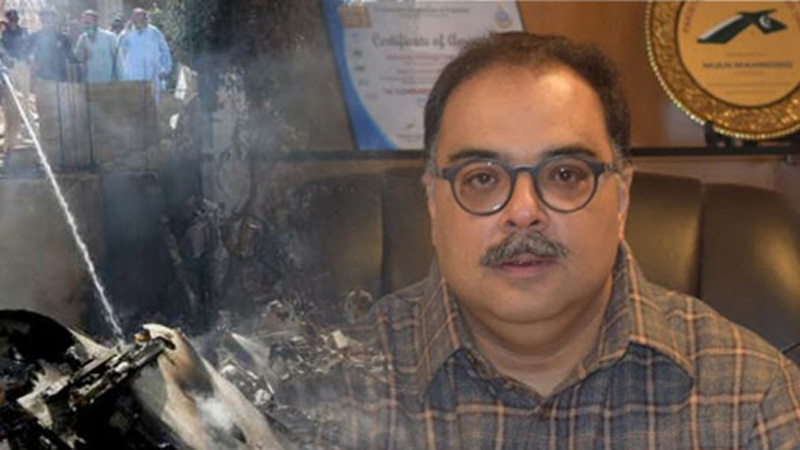 Masud was among 98 persons travelling in Karachi-bound PIA flight PK-8303 from Lahore, which crashed in the Jinnah Garden area near Model Colony in Malir almost a minute before landing.

It is still too early to say if there are more survivors from the tragedy, by the update has offered a glimmer of hope to rescue teams racing to save as many souls as they can.

The BOP president was shifted to the Darul Sehat Hospital after being recovered from the crash site and is reportedly out of danger. He spoke to his mother on the phone and informed her about his health.

Masud has sustained fractures to his hip and collar bones, the Darul Sehat Hospital’s administration said, adding that there were no burn marks on his body, only scratches.

According to the hospital administration, Masud’s CT scan has been done and his condition is out of danger. Masud’s brother was with him in the hospital.

The survivor of the plane crash also gave a statement in which he said that the plane started jolting before landing. “The next moment there was a hard crash and I lost consciousness,” said Zubair, adding that when he came woke up there was ‘smoke everywhere’. The hospital administration said that Zubair faced minor injuries and is currently under treatment at the burns ward.

Reports indicated that the plane’s tail-end hit the ground first and that anyone who survived was seated in the front portion.

Meeran Yousuf, the media coordinator for Sindh health minister, also confirmed that two passengers had survived and were brought to hospitals. She identified the survivors as Zubair and Zafar Masood, who is the president of Bank of Punjab.

A third person, who had earlier been identified as a survivor from the plane, was later identified to be a resident of the area where the plane crashed.