US thanks Pakistan for medical supplies to fight Covid-19 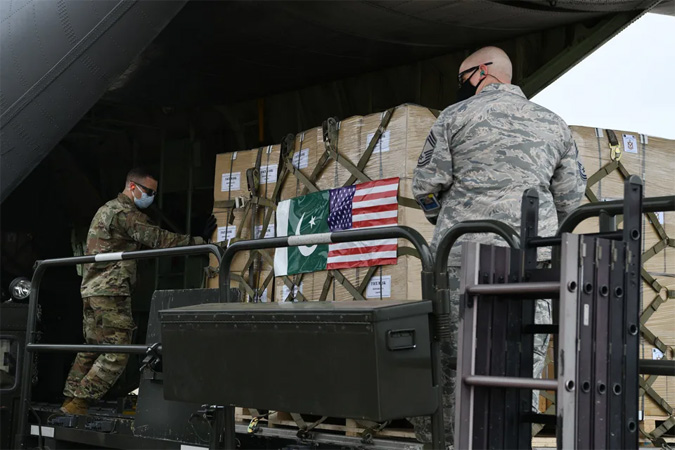 The United States on Friday thanked Pakistan for its donation of protective gear and surgical masks to support the fight against coronavirus.

US Secretary of State Mike Pompeo in a tweet appreciated Pakistan’s goodwill donation of surgical masks and protective suits to Federal Emergency Management Agency (FEMA). “This delivery is a symbol of Pak-US solidarity in the fight against Covid-19,” he said. He termed it a “partnership for prosperity of the two countries”.

US diplomat Alice Wells in her tweet also expressed gratitude to Pakistan for the goodwill donation. “Our countries’ health partnership and coordinated response will help defeat this virus, and rebuild our prosperity,” she said.

The consignment of Personal Protective Equipment (PPEs) from Pakistan via a C-130 flight from Islamabad landed at Andrews Air Force Base, Maryland on Wednesday. The equipment has been handed over to FEMA for onward delivery to the US armed forces. Pakistan’s Ambassador to the US Dr Asad Majeed Khan and senior officers of the embassy’s Defence Wing were present at the airport. Also present were David Helvey, Acting Assistant Secretary of Defence for Indo-Pacific Security Affairs, and other American officials.

In his remark on the occasion, Ambassador Khan referred to the historic ties between the people of two countries and their armed forces. He said that armed forces of both countries had fought together in the global war on terrorism and stand together in fight against Covid-19 pandemic. This, the Pakistani envoy said, was a manifestation of the longstanding and close cooperation between the armed forces of both countries, particularly in dealing with natural calamity, as both Pakistan and the US remain closely engaged in combating Covid-19, he added.