LARKANA: As many as 65 news HIV/AIDS positive cases have been registered in last two months between June 20 to August 20, 2016 at AIDS Treatment & Care Center established in Chandka Medical College Hospital. Researchers fear due to lack of screening and other facilities available ,there are potentially thousands more cases who have not been screened so far and are roaming .

The data shows that Larkana still tops the list with as many as 637 patients followed by Kambar-Shahdadkot having 178 positive cases, Dadu comes third having 122 patients, Khairpur Mirs is on fourth position as it has 111 cases.

Among other cities Sukkur have 50 registered cases , Shikarpur 48, Jacobabad 30, Kashmore-Kandhkot 26, Naushehro Feroze 20, Ghotki 15 & Jamshoro 11 positive patients. Out of 1260 cases, as many as 989 are males, 226 females, 16 children and 29 eunuchs and only 737 are on HAART as others have left the treatment incomplete owing to the fact that they were unable to bear the traveling cost to Karachi for Viral Load test which is a must to determine the treatment benefits.

This vital facility is not available here despite having so many cases which is discouraging poor patients to follow their treatment and screening.

Doctors say male nurses, female counselors, male & female patient attendants are also required to be appointed without any delay along with two rooms for laboratory and ARV medicines storage at this vital site.

The situation is very much against the vision of slain PPP chairperson Benazir Bhutto who had decided to give top priority of health & education sectors but the rulers have forgotten her pledge. This situation is very serious & needs to be tackled on emergency basis to curb its further spread otherwise, experts fear.

According to them the government must take foolproof measures to stop this menace from further penetrating among the society without ignoring it. 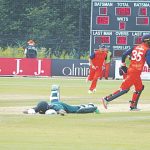