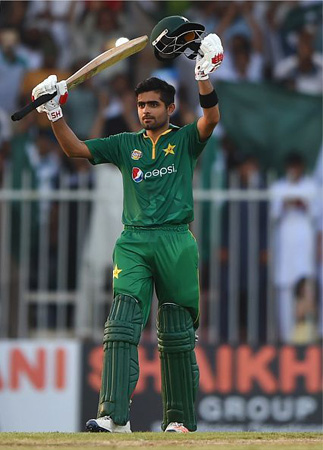 Pakistan star batsman Babar Azam has played down his comparisons with Indian skipper Virat Kohli, saying it is not wise to do so as both are “different” kind of players. “I think it’s better if you are not comparing me with him. I have said that he is a different kind of a player, and I am a different player,” Azam said during a teleconference here Monday. “I am only striving to bat well and help my team to victory every time I take to the field.” With consistent performances across three formats, the 25-year-old Babar is steadily rising up the ranks in recent years, while Kohli has already established himself as one of the greats of the game in recent years. T20I skipper Babar has recently been appointed Pakistan’s ODI captain also, and he is also the heir apparent to Azhar Ali in Test cricket.

World number one Twenty20 batsman Babar said that he was praying the coronavirus pandemic would not scupper his first T20 World Cup as skipper. The coronavirus pandemic has led to either cancellation or postponement of all sports events and there is a cloud of uncertainty over the Twenty20 World Cup. Australia is due to host the seventh Twenty20 World Cup in October and November but organisers face challenges of providing appropriate bio-security and quarantine measures for 15 international teams. Lingering travel restrictions could also hit the event, where 45 matches are scheduled to be played in seven cities. “It will be my first World Cup as skipper so I am praying for it and keeping fingers crossed,” Babar maintained. The International Cricket Council (ICC) will discuss the event at its board meeting in Dubai next week. Babar said he would not mind if cricket was played in closed stadiums, without fans. “It would be tough to play without fans because they cheer along and back you up, but who knows better than us how to play without crowds,” said he.

Pakistan were forced to play before sparse or no crowds in the United Arab Emirates in the aftermath of the 2009 attack against a visiting Sri Lanka team in Lahore. International cricket returned gradually from 2015 but it was only last year that the country managed to stage a Test at home after a gap of ten years. The one-day international captain also vowed to improve Pakistan’s rankings. “We are now fourth in T20Is, sixth in ODIs and seventh in Tests which is not acceptable and I want to see improvements in that.”

Babar said that his primary role in the side was batting but he was also keen on improving his English. It must be noted that former Pakistan cricketer Tanvir Ahmed, on Saturday, in a YouTube video, said that Babar needed to improve his personality and command over the English language as he would be required to communicate often with the media as the captain of the Pakistan team. “Batting is my primary role and I’m focused on that but I’m also working on improving my English,” said Babar, while responding to a question. The prolific right-handed batsman was also optimistic about the team’s future in limited-overs formats. “It is an honour for me to captain Pakistan in ODIs as well. It is not easy to lead Pakistan side but I will try my best to ensure the team produces good results in ODI and T20I cricket.”

Babar said he wanted to follow in former captain Imran Khan’s footsteps and embrace controlled aggression. “I would like to go with what I have learnt that is attacking. So, I would like to follow Imran Khan style of captaincy,” Babar said. “As captain, you have to learn to be cool. You have to take players with you as well as planning with them against other teams. There are instances when you get angry inside but then you have to contain yourself and must have to control your aggression in the field. The confidence is the key and the more you back your players, they will give their best. With player support you can have a bed of thorns turn into a bed of roses.”

In addition to the challenges on the field, Babar will have to handle pressure from the media, senior players and power struggles in selection. Historically, many Pakistan captains have struggled to juggle multiple roles and as a result have drifted away from playing their natural game. Babar, though, is confident that leadership will not have an adverse effect on his batting.