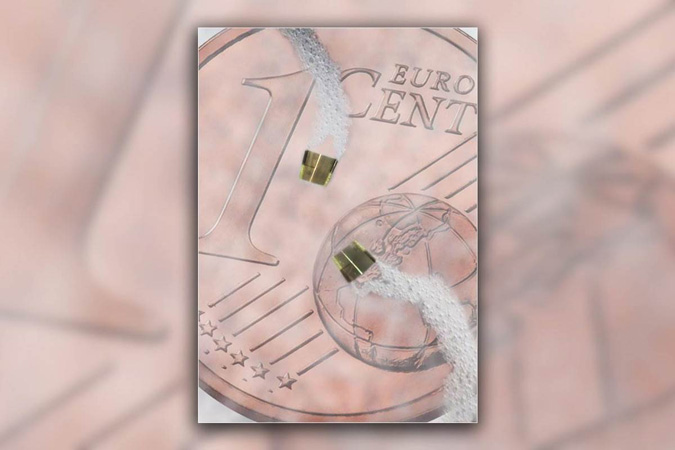 Although we’ve previously heard about various groups’ tiny “microbots,” a new one is actually claimed to be the world’s smallest microelectronic robot. What’s more, it moves by shooting out dual jets of bubbles.

Incorporating a propulsion system that was first conceived of almost 10 years ago, the device was developed by an international team led by Prof. Oliver G. Schmidt of Germany’s Chemnitz University of Technology.

The flat-bodied microbot measures just 0.8 mm long by 0.8 mm wide by 0.14 mm tall, and is wirelessly steered by an external transmitter. Upon receiving an electrical signal from that transmitter, an induction coil in the center of the robot heats one of two rolled-polymer tubes – these run lengthwise along either side of the top of the bot.

Both tubes continuously suck in a hydrogen peroxide/water solution, in which the robot is immersed. A small amount of platinum inside each tube causes a catalytic reaction, producing oxygen bubbles that are expelled out the rear ends of the tubes. This setup serves to produce thrust.

By heating only one of the tubes to varying degrees, though, it’s possible to temporarily increase the extent of the catalytic reaction (and thus the amount of bubbles produced) within that tube. As a result, the robot can be steered through the aqueous solution via remote control.

The scientists have additionally created a sort of manipulator arm for the device, in the form of an actuator composed of a thermoresponsive polymer. In response to increased or decreased heat, this appendage opens or closes, allowing it to grasp tiny objects. The bot can additionally be equipped with a tiny LED source.

Before the microbot can be used in applications such as the targeted delivery of medication within the human body, though, it will need to be adapted to run on a “fuel” that’s more biocompatible than hydrogen peroxide. Development of this capability represents the next phase of the research.

A paper on the study, which also involved scientists from the Technical University of Dresden and the Chinese Academy of Sciences Changchun, was recently published in the journal Nature Electronics.