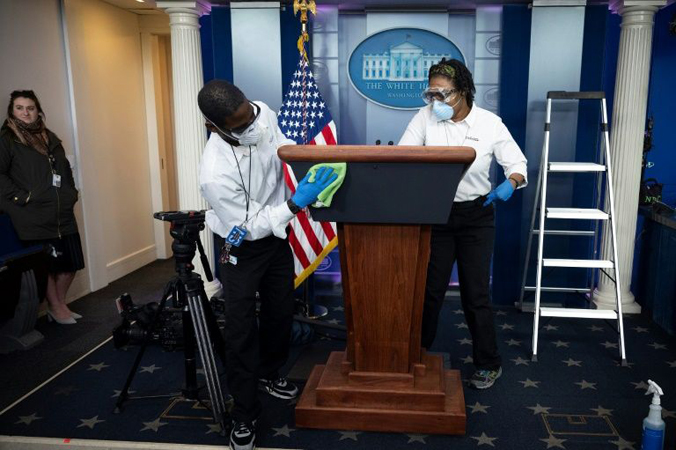 As US President Donald Trump moves to reopen the coronavirus-battered country, the White House is battling infections within its own ranks.

And stemming an outbreak of the highly-contagious virus is not an easy task in the famed West Wing.

Though it may appear spacious in movies and TV shows, the West Wing, where the president works out of the Oval Office, is actually rather cramped, making social distancing difficult.

In the past few days, a personal valet to Trump and the press secretary to Vice President Mike Pence, head of the White House’s coronavirus task force, have tested positive for the virus.

Three members of the task force have gone into quarantine — infectious disease expert Anthony Fauci, Robert Redfield, director of the Centers for Disease Control and Prevention, and Stephen Hahn, head of the Food and Drug Administration.

Trump on Monday, several hours ahead of a press conference in the White House Rose Garden, made no reference to the outbreak at 1600 Pennsylvania Avenue and claimed things were on the upswing.

“Coronavirus numbers are looking MUCH better, going down almost everywhere,” Trump tweeted. “Big progress being made!”

Trump, who is desperately seeking to reboot the country and economy ahead of the November presidential election, also fired off a series of tweets at one of his favorite targets — the media — and his predecessor Barack Obama.

The West Wing houses not just the president’s office but also those of some of his closest advisers, the press briefing room and the desks of White House correspondents, who work elbow to elbow.

‘Scary to go to work’

Kevin Hassett, a senior economic advisor to the president, told CBS over the weekend that it is “scary to go to work.”

“I would be safer sitting at home in my house than going into a West Wing that with even all the testing in the world and the best medical team on Earth, is a relatively crammed place,” Hassett told another network, CNN.

The coronavirus made its first known appearance among the president’s entourage a few days ago when Pence’s press secretary, Katie Miller, tested positive.

Miller is married to Stephen Miller, a senior policy advisor to the president.

A member of the US military who serves as a personal valet to Trump also tested positive.

Trump and Pence, his designated successor, have been tested daily and the tests have been negative so far, according to the White House.